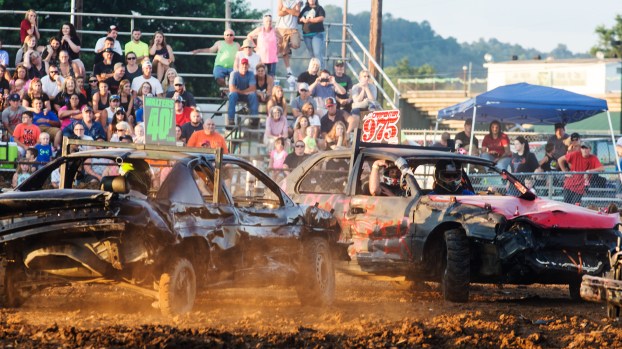 It will be held Saturday at the Lawrence County Fairgrounds in Proctorville. The gates will open at 1 p.m. and the demolition derbies begin at 5 p.m.

Lawrence County Commissioner Freddie Hayes said the goal of the event is for people to have a good evening and to raise funds for the upkeep of the fairgrounds.

“Things like keeping it mowed, which is an expense throughout the year,” he said. “It is really to maintain the grounds.”

Delana Gates, the treasurer and secretary of the Lawrence County Agricultural Society, said that there were about 60 cars in the last Fall of Destruction and it draws a lot of people to Proctorville.

“We got people coming from everywhere,” Hayes said. “We got a guy coming out of Virginia for this. It should be a pretty decent crowd. It was last year.”

Gates said the derby participants are very much like a family. She mentioned that, during the fair in July, they surprised Levi Walters with a car to participate in the derby after he didn’t think he was going to be able to because he had undergone chemotherapy for melanoma cancer. He didn’t have the time to build a derby car, so the other drivers secretly put one together and then presented it to him before the start of the first derby.

“That was a big surprise for him,” Gates said. “It was awesome.”

She said that at one of the derbies, the drivers took off their helmets and then passed them around the gathered crowd to get donations for the family of 22-year-old Brandon Craft, who had passed away suddenly in June.

“People put money in the helmets and we raised over $2,000 and that was given to the family for funeral expenses,” Gates said. “It’s like a big family. They help one another out.”

The derbies will go on, rain or shine, on Saturday.

“We are hoping for the weather to cooperate,” Hayes said, but if it rains, that is good too. “The messier, the better.”

Man charged with murder: Accused of stabbing stepfather during fight

A man has been arrested and charged with murder and tampering with evidence in connection to an August stabbing in... read more