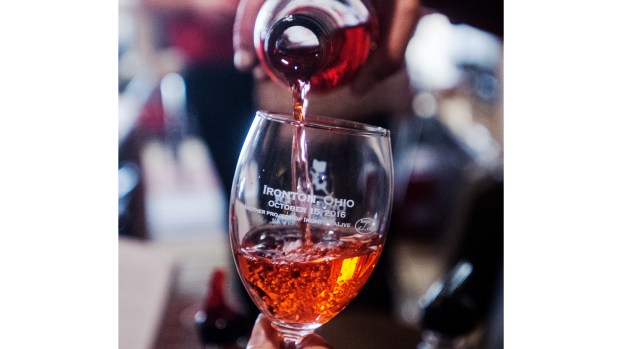 The wine festival brings in around 100 people, both locally and from northern Ohio as well as Illinois, Pennsylvania and Indiana. (The Ironton Tribune/File Photo)

Ironton aLive’s Art and Wine Festival returns this Saturday for its fifth year.

And at the same time, the group’s Heritage Festival will be going on across the street at the farmers market.

Ginger Gillenwater, Ironton aLive’s chairwoman, said the wine event would again be held at the Transit Center on Second Street.

“It will also be in the Iron Town Coffee Lab, they will be providing hor d’oeuvres for the event,” she said. There will be a number of wines from Ohio wineries and some of it will be from Pick‘n Save. “There will be a wine steward who will help people pair wines with specific types of food, like what goes best with steak, what wine goes best with Italian food.”

The first wine festival was held in 2014 as part of Ironton aLive’s Heritage Festival, but it has grown to fill in a gap on the Ohio River Valley Wine Trail, which runs from Paducah, Kentucky to Pittsburg, Pennsylvania.

When Ironton aLive was creating events to attract people to Lawrence County, they realized there was a blank spot between wine festivals on the trail, with was no stop from Adams County to the other side of Gallipolis and stepped in to fill the spot.

Now, the wine festival brings in around 100 people, both locally and from northern Ohio as well as Illinois, Pennsylvania and Indiana.

“We have been working for the last several years to fill that gap,” Gillenwater said. “We had people come from Toledo and Cleveland.”

She said to let more people know about it, they advertised with Wine Buzz, a magazine that focuses on Ohio wine and events and is distributed to about 120,000 people across the state.

“Ninety three percent of their readers decide which event they are going to go to based on that magazine,” Gillenwater said. “That way we could reach out more to the people in the northern counties who like to travel to wine events like ours.”

Tickets for the event are $35, which includes six two-ounce samples, a wine glass and wine-friendly finger foods including cheeses, fruit and crackers. Tickets for additional samples can also be purchased

Bottles of wine will also be available for purchase. Tickets can be bought in advance at several Ironton stores including Treasures From the Valley, The Vault Market, Unger’s Shoes, Dick’s Music Shop and Cardinal Wishes. Tickets can also be purchased at the door.

This is also the fifth year for the Heritage Festival, which will feature a car show and crafts from local artisans.

The car show runs 10 a.m.-2 p.m. and will be set up on Bobby Bare Boulevard and in the parking lot of the splash park.

“We’re expecting a pretty good turn out, we’re supposed to have good weather,” said Bob Cleary, who has run the car show for the past four years. “Last year, it was super cold and super rainy, but we still had 26 cars. I think this year will be a lot better.”

There is a $10 entry fee and all entrants get a dash plaque and a chance to win a trophy.

Three actors from Potterverse will be at Wizardfest

Wizardfest is bringing a bit of the magic of the Potterverse to Ironton. On Friday, Brad Bear, one of Wizardfest’s... read more