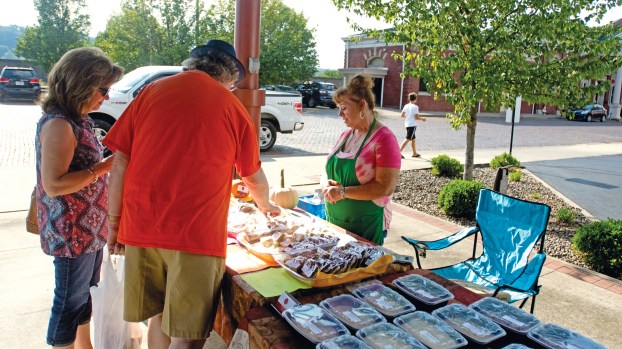 Customers checked out the homemade baked goods of Crystal Dillon during the first Harvest Moon Festival on Saturday at the Ironton Farmers Market on Second Street.

It was an occasion to introduce the first Harvest Moon queen and her court and for people to come hear some music and browse the local produce and homemade goods at the Ironton Farmers Market.

One of the vendors, Crystal Dillon, of Ironton, had baked goods such as several types of fudge, cookies and breads, as well as cookies made just for dogs, attracted customers getting a little snack to eat while they watched the bands play.

First up was the Ironton Varsity Singers. The orange-clad choir performed for about 45 minutes, with several people taking solos for songs like “Wagon Wheel.”

Around 5:30 p.m., Souls of the Wounded spent an hour performing classic rock songs.

The first part of the event was letting the public meet the Harvest Moon queens. Some of the littlest ones weren’t up to the meet and greet and teared up.

This year’s Harvest Queen is Madison Sheppard, a senior at Ironton High School and the daughter of Traci Turley.

She said she entered the pageant as a challenge.

“Girls need to know they can compete with each other and feel confident in themselves,” she said.

As the queen, she will represent Ironton at various events throughout the year, including the annual Lawrence County-Ironton Memorial Day Parade.

“I love doing that kind of thing, it boosts your confidence and it will be fun to see everyone,” Sheppard said.

She said being queen was a fun way to start her senior year.

“It feels great,” she said. “The first day back at school, everyone already knew and it was fun to be recognized by people you didn’t even know actually supported you.”

“It probably would have been better if we didn’t do it while the Buckeyes are playing,” he said, with a laugh. “The choir always brings out a good number of people. And Souls of the Wounded, they are a good group.”

Heighton said they would have another Harvest Moon Festival next year.

“We might do things a little different, add some things,” he said. “It was a good family-friendly event. We had a lot of kids running around here. It was a good day.”

Ironton aLive’s Art and Wine Festival returns this Saturday for its fifth year. And at the same time, the group’s... read more