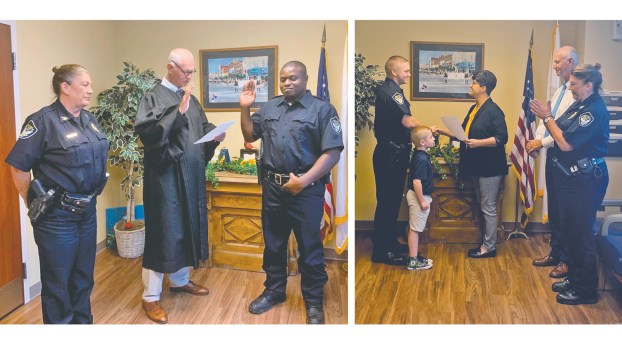 Joshua Golsby, above, was sworn in by Ironton Municipal Judge Kevin Waldo on Sept. 23 as Ironton Police Department Chief Pam Wagner looks on. Tyler McGraw was sworn in as a new member of the Ironton Police Department by Ironton Mayor Katrina Keith as Waldo and Wagner watch on Sept. 16. The men came to the IPD after working for the Lawrence County Sheriff’s Office. (Submitted photos)

The Ironton Police Department is back to full staffing with the recent addition of two new police officers.

“They come to us by way of the Lawrence County Sheriff’s Office,” said IPD Chief Pam Wagner. “We expect great things out of these officers, they come highly recommended and went through a lengthy hiring process and finally got the positions.”

McGraw was a road deputy with five years of experience at the sheriff’s office.

Golsby worked in the jail and had some road patrol experience.

The new officers will be riding with shift captains or other field-training officers for a bit.

“We will get evaluations and input from their supervisors, they will be with multiple supervisors, and then it will be determined when they can patrol on their own,” Wagner said.

Wagner said that with the addition of Golsby and Tyler, the IPD is back to the same staffing level as last year when two officers left the force to work in the prison system.

“They fill in the vacancies, they are not new positions,” she said, adding it puts the staffing level back up to 15. “We are thrilled to be back up. We are very busy and we were short handed, down several officers, during summer, which is our busiest time of year. We definitely welcome them aboard and expect great things out of them. They seem to be eager to learn.”