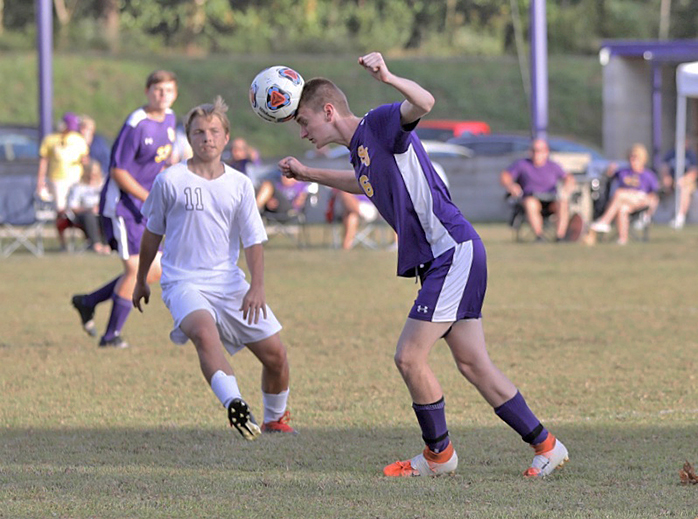 St. Joseph Flyers’ Jared Johnson (right) gets a direct hit on a header shot while Chesapeake Panthers’ Bryson Haynes (11) looks to defend the shot. The Flyers beat the Panthers 6-0 on Thursday. (Photo By Tim Gearhart)

Huck Finn and Tom Sawyer are the only ones who know how to “whitewash” something.
While the fictional characters of Mark Twain would whitewash a fence, the St. Joseph Flyers were whitewashing the Chesapeake Panthers with a 6-0 soccer win on Thursday.
Goalkeeper Jimmy Mahlmeister got another shutout this season season as he turned away eight shots on goal.
“This was our fifth shutout of the season. Our defense held strong. It was a total team effort. The team kept us in a good position to win with a lot of possessions and shots,” said Flyers’ coach Mike Balestra.
Jackson Rowe and Ryan Payne were doubling up on the Panthers. Rowe and Payne scored two goals each while Zach Roach and Matthew Sheridan each scored a goal.
Dru Canter, Payne and Rowe all had an assist for the Flyers.
Chesapeake goalie Elijah Snyder had three saves.
The Flyers had a total of 31 shots with nine on goal, three fouls, four corner kicks and three free kicks.
Chesapeake had 13 shots with eight on goal, three fouls, six corner kicks and three free kicks.
St. Joseph (9-2) plays at 11 a.m. on Saturday at Greenup County, Ky.