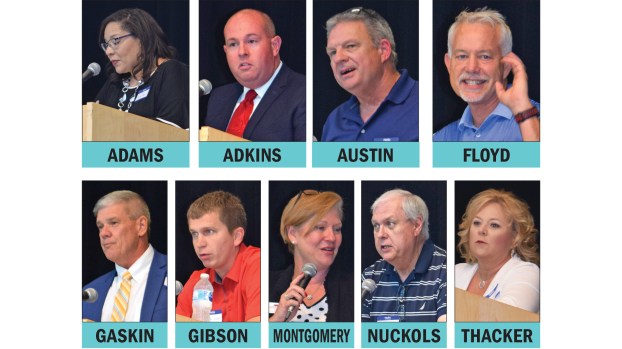 The Concerned Citizens of Burlington hosted their Meet the Candidates forum at Burlington Elementary, extending an invitation those running for South Point mayor and council, Fayette Township trustee and fiscal officer, the South Point School Board and the Lawrence County ESC board.

BURLINGTON — The fall campaign season is under way and candidates who will appear on the ballot in the Burlington and South Point area took their message to voters on Thursday.

The Concerned Citizens of Burlington hosted their Meet the Candidates forum at Burlington Elementary, extending an invitation those running for South Point mayor and council, Fayette Township trustee and fiscal officer, the South Point School Board and the Lawrence County ESC board.

In total 12, candidates were listed on the agenda, with seven attending. Two additional candidates also attended.

The first to speak was Justin Gibson, who is running for Fayette Township trustee. His opponent, Terry Wise, was not present.

Gibson, 34, works as a physical therapist, which he said is the “most rewarding” job he has had.

“I know that I can do good,” he said. “I have a good relationship with the other townships.”

He said he would be a “proactive” trustee.

“We need to maintain the roads, so people won’t complain,” he said.

He also said he wanted to look into methods to raise revenue, such as dinners and fundraisers.

“Other ways than to just pin it on the taxpayer,” he said.

Gibson said he would be a “public servant” and a “hands on” trustee, taking part in the work firsthand.

He said he also wanted to start a Tidy Up Fayette Township group, which would focus on jobs such as litter pickup, mowing and weed eating once a month.

“The people would decide where we go,” he said.

Incumbent fiscal officer Terry Wise, who is running unopposed, was not present, citing a prior engagement, but sent a letter to the event thanking voters for their support.

Incumbent Mayor Jeff Gaskin, who is seeking a second term, cited multiple accomplishments during his term.

“The village is cleaner than ever before,” he said. “Our employees work hard.”

He pointed to the demolition of a dilapidated apartment complex on North Kenova Road, which he said he worked with the land bank to tear down.

And he said there are two other structures the land bank has demolished.

Gaskin said the police department “was second to none” with other villages, and cited grants for bulletproof vests they had received and SWAT training they had undergone.

He said the fire department was also well supported and pointed to a contract just signed for a new engine.

Gaskin said the village had launched twice-a-year community yard sales an shred days since he took office and arranged for a tire collection and drug takeback.

He said the village had worked for a house that was an “eyesore” to be torn down so that White Cottage Cemetery could be expanded with 50 plots for sale to the public.

“We recently had our first interment in the new section,” he said.

Gaskin also pointed to improvements with the village park, such as ADA lighting and handicapped accessible equipment, which had been purchased with funds from speeding and stop sign crackdowns.

He said delinquencies with the sewer department were down 30 percent, thanks to “aggressive collection” and improvements had been made to the sewer plant, such as an $800,000 clarifier project. He said water and sewer were now more automated and the village is now able to know of breaks in the system “within seconds.”

“And we have the lowest water and sewer rates for many miles around,” he said.

Gaskin said, thanks to good fiscal practices, the village had paid off the loan for village hall two years early.

He said they had also received a $10,000 grant from the EPA for asset management and $50,000 for a generator for the sewer plant.

He was also especially proud to cite the $800,000 grant the village has received for construction of sidewalks, from the elementary school to the cemetery on both sides of the street.

“I work hard every day to make South Point a better place and love the village of South Point,” Gaskin said.

His opponent, former village worker Fred Craft, was not in attendance at the event.

Gaskin was asked during the question and answer session about a claim made by Craft in a Facebook video that village equipment was being used for work in Ironton.

“In our neighborhood of southern Ohio, municipalities help each other out,” Gaskin said.

He said the village has borrowed equipment from neighboring townships, as well as the City of Ironton.

“Ironton trucks have been in South Point many times,” he said. “And, when their director of utilities asked our village administrator for a favor, we did not hesitate.”

He took issue with Craft’s implication that something unethical was done.

“This is not about graft, corruption or lies,” Gaskin said. “It’s about helping our neighbors.”

Fayette Township Trustee Mike Finley, who was in the audience, said they have received help from South Point and traded services with the village many times.

“This is good for everyone,” he said.

Two candidates were present in the race for village council.

Incumbent Chuck Austin, a 60-year resident of the village, said it was important for the council to work as a unit.

He pointed to his background in business, such as pipeline construction and managing labor to being president of a 300-person company.

Austin said the key to a functioning village also included a mayor and village administrator and he said they had a good relationship with Gaskin and Russ McDonald.

Austin said the village money has been spent wisely on “needs, not wants.”

“It’s amazing what we have done,” he said. We need to make sure we keep going in the right direction.”

Brad Adkins is making his first bid for office.

A former youth pastor in South Point and the current pastor at Chesapeake Church of the Nazarene, he said he would approach the job with a “servant’s heart,” citing his faith and following the example of Christ.

“This is not something I enter lightly, but I feel I am being called,” he said of his run for office.

Adkins said he is “very conservative” and believed the “least government is the answer.’”

“When more money is in an individual’s pocket, it goes back out and stimulates the economy,” he said.

Incumbent Michael Lynd was not present at the forum, but sent a letter citing his background and asking for support.

Three incumbents were present for the forum to ask for reelection to the district’s school board.

Stacey Thacker said she has worked with families and children for 25 years, including 10 years as a school social worker, where she also served as a coach, a prom coordinator and worked with student council.

“Some of the best times of my life were to walk the halls of my alma matter and be a part of it,” she said. “I’m proud to be a Pointer and want to continue to serve our children.”

She said she has served several positions with the Ohio School Board Association, as well as the Southeast Regional Executive Committee, where she is the only representative from Lawrence County.

“It’s been a great honor representing not only South Point Schools, but Lawrence County itself,” she said.

Natalie Adams, who currently serves as board president, said she hopes to “ensure our education system continues to move forward.”

She cited the challenges communities face as funds have not increased from the state.

She said a strong school board is of value, even for those who do not have children in school.

“When industry comes in, the first thing they check is the strength of the local education system,” she said. “I would love the opportunity to continue to serve.”

Jack Nuckols said, although he was retired, he was asked to retun to the board to fill the seat vacated by Colton Copley in 2018 when he was appointed as Lawrence County commissioner.

A retired teacher and current substitute, his wife is a teacher at Burlington Elementary, where she was previously principal.

He said he has a long history with the district, with a third of Burlington’s current faculty being former students of his.

“I was asked by my colleagues to run again, so I thought I’d throw my hat in the ring one more time,” he said.

Tifanie Arbogast was not present, but had a representative read a letter in her place.

While the Lawrence County ESC race was not on the agenda for the evening, one of its candidates was present, as the countywide race appears on Burlington ballots.

Jeff Floyd is seeking reelection to the board.

“I’m dedicated to continuing to improve schools in Lawrence County,” he said.

He cited his background, which includes 10 years on the Symmes Valley school board and four years at the ESC.

He said in his time at the ESC, they have improved transparency, launching an improved website and social media presence. He also pointed the to start of a business advisory committee.

He said the duties of the ESC included training and support for teachers, as well running a school for at-risk students., which recently had 30 graduates.

“If elected, I will continue to help our districts improve test scores,” he said. “I will do what is best for our students and schools.”

While her race is not on the ballot until 2020, Republican Bobbi Montgomery was present as the event.

She is running for the seat being vacated by State Rep. Ryan Smith, R-93, who was term limited from re-election.

Smith announced earlier in the day that he will be resigning his office, which means a replacement will be appointed until the election.

Montgomery said she had attended just to take notes on local races and issues, but was asked to introduce herself to the room.

She said she has 28 years in finance as CFO of a company in Jackson, where she resides.

She said she served on many public boards and that the “tipping point” came when she realized she could better affect change by running for office.

“If elected, you will continue to see the type of worker I am,” she said. “I always give all of me to what I am doing.”

Two candidates also voiced their support of a funding levy for Lawrence County Developmental Disabilities, with Gaskin and Floyd urging voters to vote to pass it.

BRINGING THE FARM TO YOU: Event to highlight region’s farming

ROME TOWNSHIP — The Lawrence County Fairgrounds will play host Saturday to an event designed to showcase farming in the... read more