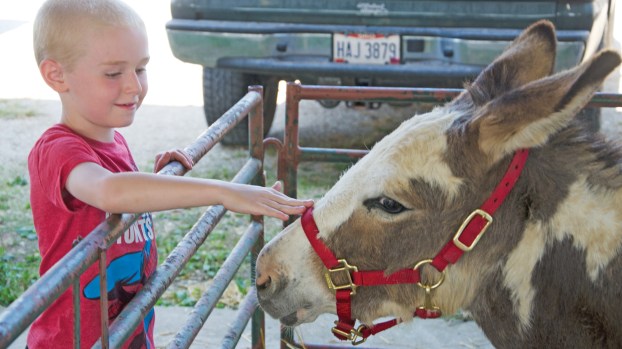 A child pets a donkey from Rocky Top Farms at the Lawrence County Farm Bureau’s second annual Bringing the Farm to You event at the county fairgrounds on Saturday. (The Ironton Tribune | Heath Harrison)

ROME TOWNSHIP — Judy Ross, of Good News Llamas in Chesapeake, said attendance was strong on Saturday for the second year of the Bringing the Farm to You event at the Lawrence County Fairgrounds.

And the turnout remained strong throughout the day, with a crowd still there several hours in.

The event, which spun out the Lawrence County Farm Bureau’s farm tour of the county was moved to the fairgrounds last October to give in a central location.

The weather this year, at an earlier date, proved more accommodating and attendees visited booths from several local farms and organizations, who were there to educate the public about farming in the county.

In addition to the Farm Bureau, there were displays from the OSU Extension Supplemental Nutrition Assistance Program Education, where bottles were set up to show how much sugar is contained in various drinks.

“These show how much you consume in a week,” Peggy Jensen, with the program, said, noting that the bottles were nearly full.

She had available a healthier alternative, in the form of water that had oranges and lemons soaking in it for flavor.

The aim was to promote healthy eating and lifestyles at an affordable price, and an obstacle course was also on hand for children to exercise.

Lawrence County 4-H was also present, with information on their programs, offered through the OSU extension office.

“They have a shooting sports program, and that’s new here,” Ross said.

Ross’ business was also present, which she runs with her husband, Tom. The couple raises llamas on their farm in Chesapeake and produce yarn and other fiber products for their second business, Back Porch Fibers.

Another booth set up was for Tarheelbilly Farm, of Willow Wood, owned by Ben and Charis Walker.

Walker had displays of bee hives, as well as a demonstration for collecting maple syrup. He said he has 450 trees tapped on the farm and he and his wife produce the syrup to sell locally and online.

In addition to food vendors and other booths, this year’s event also featured a sizeable children’s area, with a corn box, games and pumpkin decorating.

The trial of a woman accused of allegedly shooting her ex-husband in January in the parking lot of a South... read more