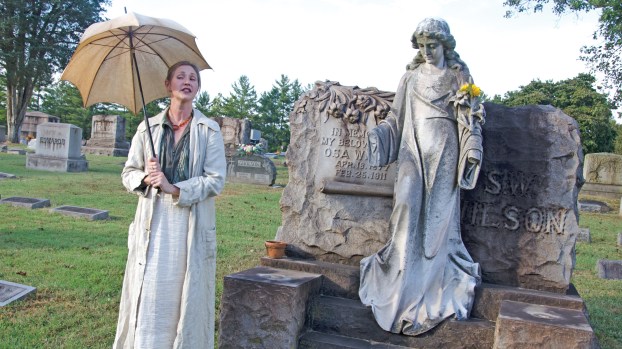 A large crowd turned out on Saturday for the Lawrence County Museum’s annual historic cemetery walk at Woodland Cemetery in Ironton.

Despite the unseasonably hot temperatures for the time of year, reaching into the high 90s, hundreds walked through the grounds, with the route focused on the historic Section 7, where community volunteers told of the lives of those buried there.

The museum and historical society have been organizing the vent for 20 years and the route features such figures as Nannie Kelley Wright, the first female ironmaster, portrayed by Kay Rader, a trustee at the museum; Col. Bill Lambert, the World War I ace, portrayed by Noah Lambert (who said he does not know if they are related); and Samuel and Eliza Dempsey, portrayed by Herb and Laura Brown.

The turnout was so strong that many of the presenters had to tell their stories more than 30 times.

This year saw one new addition — famed illustrator Edward Gorey, whose ashes were revealed this year to have been interred in the cemetery in 2000. He was portrayed by The Ironton Tribune reporter Mark Shaffer.

The museum’s next event will be the annual historic church walk, which kicks off the Christmas season and is set for Saturday, Dec. 7.