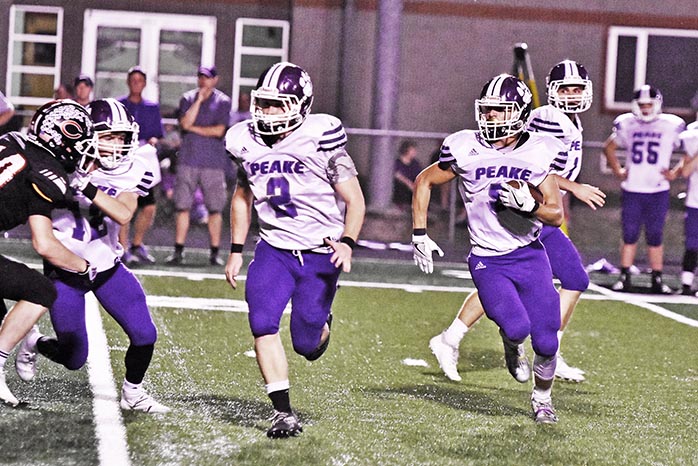 One team can score. One team doesn’t let the other team score.
It’s time to see which one breaks
The Fighting Tigers will match their defense against speedy high-scoring challenge of the Chesapeake Panthers in a key Ohio Valley Conference game on Friday.
Ironton is 4-1 and 2-0 in the OVC. Chesapeake is 3-2 and 1-1 in the league. The Panthers are facing a virtual must-win situation if they want to keep their OVC title hopes alive.
Ironton’s defense has been stingy, allowing just four touchdowns and 29 points in five games which less than six points a game. South Point scored two points last week but they came on a safety.
Chesapeake has scored 177 points in five games for an average of 35.4 points a game.
“Defensively, they are fast, physical and run to the football. They might cause some problems that will be hard to adjust to,” said Panthers’ coach Todd Knipp.
Chesapeake relies heavily on the running game that is fueled by its speed.
Will Todd had 475 yards on 53 carries for an 8.96 average yards per carry, Kamren Halress 460 yards on 75 carries for a 6.13 average, and quarterback Donald Richendollar hads 275 yards on 69 attempts for almost 4 yards a carry.
The Fighting Tigers have a more balanced offense although junior Reid Carrico is the leader in rushing and receiving.
Carrico has 432 yards on 73 carries and another 205 yards on nine receptions.
Quarterback Gage Salyers is 31-of-60 passing for 531 yards and four touchdowns with three interceptions.
“Offensively, they are spreading the ball around to skill players and attacking defenses vertically with the passing game,” said Knipp.
The Fighting Tigers lead the series 5-0 including the last four meetings as an OVC opponent. They won last year 48-27 after winning 21-14, 28-12 and 40-28 the three previous seasons.
“Ironton has a lot of experience returning from last year’s team,” said Knipp.
Kickoff for the homecoming game is 7 p.m.
In other Ohio Valley Conference games, co-OVC leader Gallipolis is at Fairland where the Dragons need a win to keep their title hopes alive, Coal Grove goes to Portsmouth in a battle of high-scoring offenses, and the South Point Pointers host the Rock Hill Redmen as each team seeks its first league win of the season.