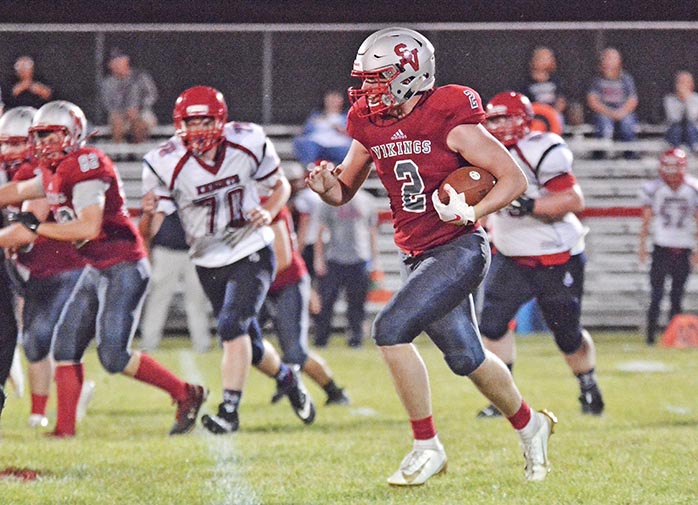 WILLOW WOOD — There was a famous syndicated comedy radio show that had the super hero Chickenman who’s catch phrase “He’s everywhere, he’s everywhere.”
That’s exactly where the Green Bobcats try to attack their opponents: Everywhere.
The Bobcats’ offense is structured to attack all areas of an opponent’s defense, and that’s the task facing the Symmes Valley Vikings’ defense on Friday when they host Green in the first Southern Ohio Conference game of the season.
“They’re going to run some option, they’re going to run some sweeps and they’ll try to pound you in the middle. They try to spread you out, create some holes and then attack you from everywhere,” said Vikings’ coach Rusty Webb.
The Vikings are 4-1 and the Bobcats 3-2 as they meet in the first Southern Ohio Conference game.
Green won last season’s game 22-15 en route to the team’s first winning season in 19 years.
Webb said the Bobcats have a quick and speedy offense led by quarterback Trevor Darnell (5-9, 170) and wide receiver Levi Waddel (5-7, 140). Supplying the power inside is Lonnie Smith (6-3, 210).
“Their quarterback can scoot, number five (Waddel) is pretty good, and they have (Lonnie) Smith back. He’s one of the best players in the league on both sides of the ball,” said Webb.
“They have good size up front and they have some nice skilled players. We definitely have a challenge ahead of us.”
The Vikings will counter with their triple-option offense.
Josh Ferguson leads a balanced running attack that has as many as five different ball carriers.
Ferguson had 51 carries for 397 yards and four touchdowns. Eli Patterson had 28 attempts for 231 yards and two scored plus three receptions for 35 yards.
Quarterback Jack Leith has rushed 46 times for 236 yards and four TDs while completing 8-of-14 passes for 156 yards and four scores.
Luke Leith had three receptions for 78 yards and three scores while Caleb Mullins had three grabs for 68 yards and two touchdowns.
Kickoff is 7 p.m.