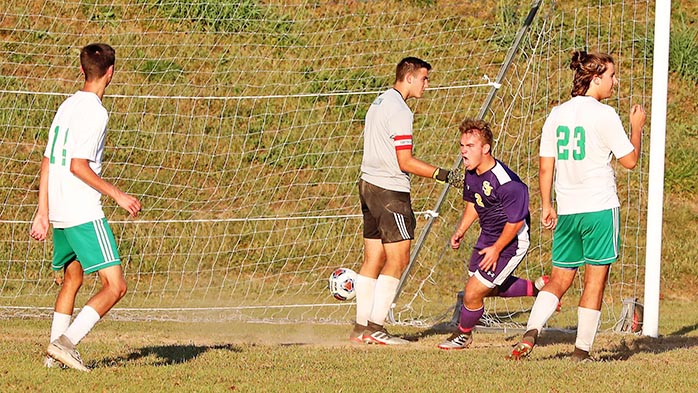 St. Joseph Flyers’ Jackson “JaRo” Rowe (2) shows his excited emotions after scoring a goal in a 6-0 soccer win over the Fairland Dragons on Thursday. (Photo By Tim Gearhart)

Evidently, the St. Joseph Flyers aren’t concerned who the opponent is each game.
The Flyers were scheduled to play New Boston but the Tigers were unable to play and the Fairland Dragons graciously offered to fill the void.
St. Joseph expressed their gratitude by posting a 6-0 win over the Dragons on Thursday in getting their seventh shutout of the season.
“We’ve played good defense for most of the season. It was a hot day but the players stepped up to the challenge,” said Flyers’ coach Mike Balestra.
Goalkeeper Jimmy Mahlmeister had nine saves as Fairland managed 13 shots with nine on goal. The Dragons also had 10 fouls, five corner kicks and four free kicks.
St. Joseph — now 12-2 on the season — had 32 shots with nine on goal, four fouls, three corner kicks and 10 free kicks.
Fairland goalie Jacob Polcyn had six saves.
Leading the offensive charge was senior Ryan Payne with two goals and two assists. Zach Roach, J.C. Damron, Zachary Johnson and Jackson “JaRo” Rowe all had one goal.
Damron added two assists to his day’s work with Bryce Balestra and Rowe getting one each.
On Tuesday, the Flyers downed the Point Pleasant (W.Va.) Big Blacks 4-2.
Damron — who kicks for the Coal Grove football team — put his kicking skills to use as he scored a pair of goals to lead the Flyers. Payne and Roach each added a goal.
Payne also had two assists while Rowe also had an assist.
Josh Reed and Alex Veroski scored goals for Pt. Pleasant. Glen Matten had an assist in the loss.
St. Joseph had 12 shots with seven on goal, three offside penalties, 12 fouls, two corner kicks and 10 free kicks.
The Big Blacks had 29 shots with 19 on goal, 10 fouls, seven corner kicks and 12 free kicks.
Mahlmeister turned away 17 shots to help preserve the win. Pt. Pleasant goalie Huston Bonecutter had three saves.
The Flyers visit Portsmouth Clay on Tuesday in a Southern Ohio Conference game.