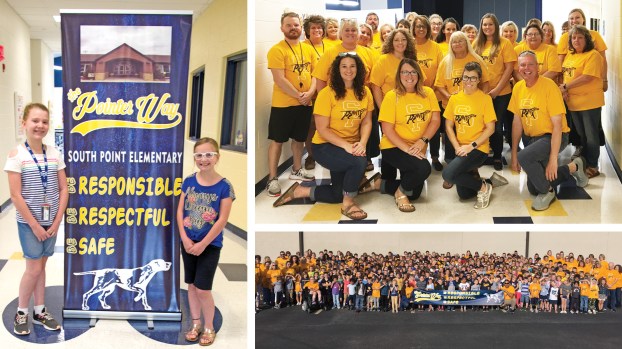 SPE initiative emphasizes positive: School one of many undertaking initiative

SOUTH POINT — Schools in Lawrence County have been implementing Positive Behavior Intervention and Supports, a new state mandate which is aimed as promoting good behavior in all aspects of school life.

While this is getting underway in all of the county’s districts this year, at South Point Elementary, they had a head start in the initiative.

Christian, who wrote his thesis on PBIS, said the school has a team that includes him and principal Chris Mathes.

“We form a team, come up with an initiative and list our expectations for all areas of school, like the cafeteria, classrooms, hallway, the bus, restrooms and the playground,” he said.

Christian said the school hosted an assembly last Friday, in which the students were told of expectations. The presentation was centered around “The Pointer Way,” which Christian said can be summed up with the slogan “Be Respectful. Be Responsible Be Safe.”

Christian said he took part in training a few years ago, at Ironton High School, along with Burlington Elementary principal Michael Clay and others.

He said PBIS, since becoming a state mandate, is key in certifying teachers.

The goal is to teach children good behavior, by rewarding them for doing right.

“It emphasizes positive behavior, rather than punishment,” Christian said. “You can’t punish your way to good behavior.”

He said the premise is that they are constantly teaching the students. He said modeling is a key aspect of the program, as is data collection, which allows them to find problem areas and redirect focus or make new rules.

“This is our first year of full implementation,” Mathes said. “It’s been going well.”

He said the program is building wide and includes all faculty.

“Every bus driver and every custodian,” he said.

Christian said aspects of it could be seen in prior years, such as the school giving students “Pointer Bucks” last year, which could be cashed in for various rewards, such as snacks or field trips.

Christian said the rollout has gone well, with students knowing exactly what The Pointer Way means.

This could be seen in two students, who, when asked, could recite it immediately.

Payce Edwards, 10, of the fourth grade, said she has seen a positive impact.

“It changed things and helped us a lot,” she said. “Before, there was a bunch of bullying and people not being good in places, like the bathrooms. It’s not as big of a problem anymore.”

Edwards said there are signs posted throughout the school, letting them know what is expected in places such as the classrooms, cafeteria and playground.

Natalie Henger, 10, of the fifth grade, said she first heard about it from Christian when he spoke of the initiative at lunch.

“Kids were just misbehaving,” she said of the atmosphere before the launch.

She said everyone’s behavior has improved. In addition to those who regularly misbehaved, she said it has impact her as well.

“I feel like I’m more alert and trying a lot harder to behave better here,” she said.

Its instructor, Caleb Jonas, brought a team of high school students to the school last year for two days, where they filmed a four-minute video on The Pointer Way that was shown as last week’s assembly.

The video, which had a spy theme, showed “Agent Christian” and “Agent Mathes,” dressed in suits and sunglasses, taking on the assignment to bring the program to the school and had students acting out both good and bad behavior.

“They did a great job,” Christian said.

In August, faculty members from Chesapeake, Dawson-Bryant, Ironton and Symmes Valley schools took part in training at the Lawrence County Educational Services Center on PBIS. The trainees will take part in three sessions throughout the fall and then report back to their schools, where they will help implement the mandate.

HUNTINGTON — A large, 440-tile mural, portraying the history of Marshall University’s lab school, is set to be unveiled on... read more