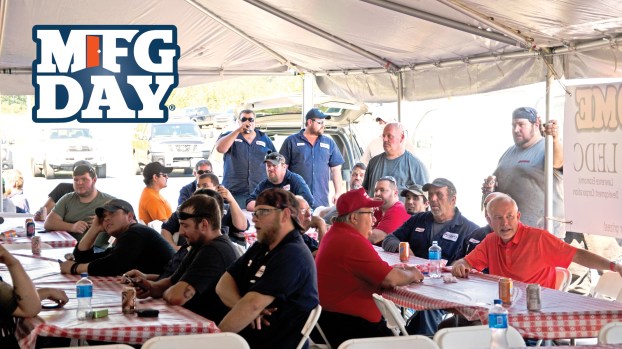 The Lawrence County Chamber of Commerce and the Lawrence County Economic Development Coalition hosted Manufacturing Day on Thursday at the Chamber headquarters in South Point. (The Ironton Tribune | Heath Harrison)

A luncheon was served and the guest speaker was Doug Hall, senior vice president, integrated supply chain of HarbisonWalker International, which opened their new state-of-the-art refractories plant at the nearby The Point industrial park last summer.

LEDC President Bill Dingus said they have hosted the event for the past four years.

“I think LEDC and the Chamber have a very deep appreciation for manufacturing,” he said. “We see it as a foundation to a region’s success and anything we can do to uplift and encourage manufacturing, we feel it is part of our mission.”

Dingus said the event, which is part of U.S.-wide celebration launched by the National Association of Manufacturers, is a chance to honor not just corporate leaders, but all employees in the industry.

“Those who put in long hours and a lot of overtime to get the job done,” he said.

Dingus said next year’s event will take place in Ironton, then, the following year in Hanging Rock, where he expects PureCycle’s new plant to up and running by that time.

He said the event was in collaboration by the community.

More than 50 door prizes were handed out from companies and the meal was served by The Armory Steakhouse, who handled the main dishes, and Catering with Joy, who did sides.

Ironton’s newest church wants to bring change to the community. IMPACT Church opened in April and banners in the sanctuary... read more