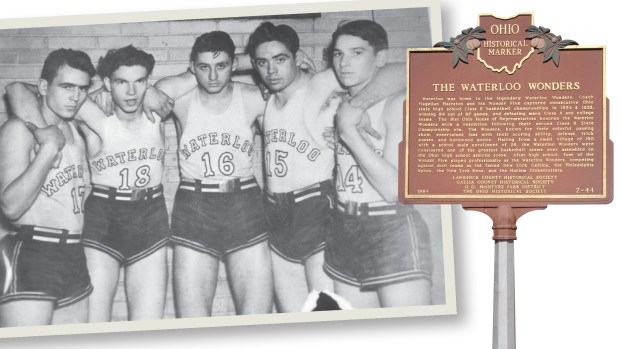 Organized by WOW Ministries, the event featured a museum area in the church historical artifacts from the basketball team from Waterloo High School, which stood next door.

The team made national headlines when the teens, coached by Magellan Hairston, won back-to-back Ohio state championships in 1934 and 1935.

Amber Miller is one of the founders of the church, which opened three years ago at 12335 County Road 14 in the 98-year-old building of a former Methodist church that closed seven years ago. She teaches a teen Sunday school class there.

Miller said the event was an example of their effort to bring positivity to the area.

“We’re an inclusive church and we’re big into community involvement,” she said, noting that they had a strong youth presence in the nondenominational church.

She said the event serves, not just to honor the team, but to provide a place for people from the area to reunite.

“There have been so many that have come through this church and the school,” she said.

The team’s history could be found in several photos and signs throughout, situated around the Ohio historical marker dedicated to the team.

Miller also pointed out that the school had a women’s team that also won a state championship.

“They’re kind of the forgotten team,” she said, adding that they would like to honor them as well.

In addition to athletics, the museum area inside also included yearbooks and photos of all aspects of the school.

She said, since reopening the church, they have made many repairs and improvements, such as a new roof, but the history is still intact.

“All the wood in this church is original and the pews are handcrafted,” she said.

The day also features food vendors, a cornhole tournament and visit from the BARKer Shop Farm and Petting Zoo, who brought animals including a camel, an alpaca and a African crested porcupine.

Miller said they plan to continue having Waterloo Wonders Day each year.

“It will be the first Saturday of October,” she said. “And any funds we make will go back into the ministry.”

Ironton In Bloom to have food at market

October is the final month of Ironton Farmers Market until next spring. And on this Saturday, it will be the... read more