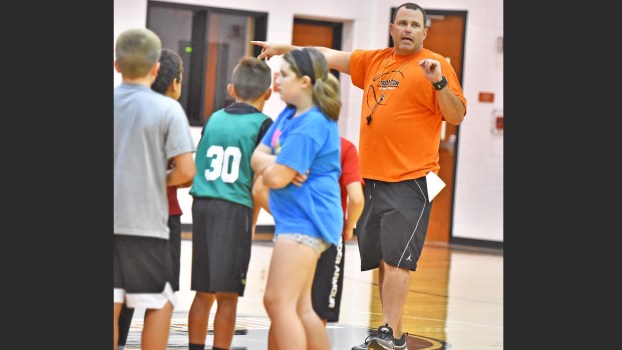 Graham’s Basketball Academy just completed its fourth week and the enrollment in this youth basketball course has been substantial.

More than 93 boys and girls in grades two through seven have registered and at least 75 have attended each session.

The idea was to help develop youth players in the game’s fundamentals to compliment the youth basketball league that has limited practice times and gym availability.
Graham has been blown away by the response.

“The way I look at this, if you’re not doing something to help you get better, somebody else is, whether it is at Ironton or at a neighboring school. They’re doing something to get better and I just wanted to provide the opportunity for the youth to get better. Hopefully, the kids who take advantage of it will get a little better, play (youth league) in the winter, and improve a little bit in the spring.”

The academy is held each Wednesday from 3:45 to 5 p.m. in the high school gyms. Graham said things were slow early the first day of the academy as is usually expected, but the pace picked up quickly and hasn’t slowed down.

“The first day attendance had to be taken, then it was getting stations taken care of. So, after the first 30 or 40 minutes, we start right at 3:45 and go all the way up to five o’clock. There’s an hour and 15 minutes of work being had by these young boys and girls,” said Graham.

Youth who are taking part in the academy are excited about what they have been able to learn.

“It’s helpful. I think it’s pretty fun. I’m glad I’m doing it,” said Tyson Harvey. “It helps me with dribbles and offense because I’ve already got my defense.”

“I think it’s pretty good. I like it. Mostly it’s helped me with dribbling and shooting. It adds to what I do in practice,” said Alverado. “We practice on dribbling, shooting, we do different moves.”

The attitude and approach of the boys and girls in the workouts has been something else that has pleased Graham.

“The response and the attitude and the attention and effort given by the second graders through seventh grade has been really positive so I feel they want to be here,” said Graham.

“Hopefully, we can incorporate some playing — maybe some 3-on-3 or 5-on-5 — in weeks five and six. It’ll be kind of an open gym format after the workouts,” said Graham.

Although the players have a favorite area or two, Graham said the academy focuses on the four main areas of basketball and the tributaries of techniques that are associated with the four main groups.

“There’s not one area we work on more than another,” said Graham.

“We want to work on proper shooting technique, we want to do defensive principles and defensive footwork and we want to do ball-handling and passing. Those are the four areas that are under an umbrella and there are things that go underneath those.”

Participants who attend five or six sessions will receive a free outdoor basketball they can use to practice what they have learned.

CHESAPEAKE — Octoberfest is set to return to the village of Chesapeake on Saturday. The event, which runs from 9... read more