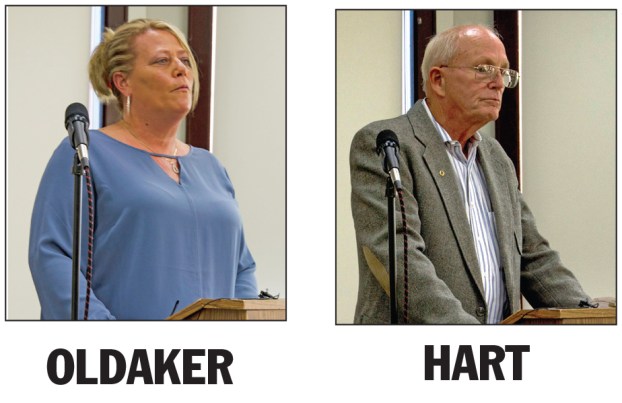 PROCTORVILLE — Two candidates in Chesapeake made their pitch for office on Monday, as part of the Ironton Tribune’s election forum  for races in the eastern part of Lawrence County.

The event took place at Ohio University’s Proctorville Center and candidates for mayor and council in Chesapeake, Proctorville and Athalia were invited to attend.

Kimberly Oldaker, who is running for Chesapeake mayor, said she is running because “Chesapeake needs a change.”

Oldaker said she would like to see more community involvement and said her “door would always be open” to residents.

A lifelong resident of Chesapeake, this is her first bid for office.

Oldaker cited her work with the local school system, as well as working with youth football and Little League.

“I have no political background,” she said. “I’m coming into this on the community side. You don’t have to be political to run. More people need to be involved in the community.”

Oldaker, whose family owns Marcum Pump and Equipment, cited the recent movie night they organized at the village park in the summer as an example of the type of activities she would like to see more of.

She said, despite temperatures of nearly 100 degrees, they were able to draw a large crowd of families out and raised money for the park.

Oldaker is running against incumbent Mayor Tommy Templeton, who is seeking a second term, as well as Michael Ferguson.

Templeton notified the Tribune in advance that he would be unable to attend the forum, due to an out-of-town prior commitment. Ferguson did not attend.

Paul Hart is aiming for a return to Chesapeake’s council. Having served in the position for three decades, he retired in 2017.

Hart said his “love of Chesapeake is second to none” and that he will “work to keep our village going.”

A local businessman, member of the Chamber and the Lions Club, he said he has worked with the county’s land bank, the planning board and health department on a number of issues and projects.

Hart is running for one of two seats on the ballot against incumbents Kenny Wolfe, who serves as mayor pro tempore, and Randy Penix. Wolf and Penix did not attend the forum.

The candidates were asked what they thought the strengths and weaknesses of the village were.

Hart cited its location on the border as “making it a great place for business.”

“There are great opportunities here for us,” he said.

He said he felt the police and fire departments are “doing a great job,” but felt that the village could do more in that area.

Oldaker said “our strength is community” and she would like to see deeper involvement by all residents. She cited this week’s Octoberfest, which she said had the biggest turnout in years, as an example of what is possible.

As a weakness, she said the village had a reputation “as a speed trap.”

“People are afraid, if they come through, they’ll be pulled over,” she said.

The candidates were asked about what they would do to increase transparency in government.

Oldaker said she would like to see council meetings held in the community, suggesting they could occasionally take place in the park.

“It doesn’t have to be at village hall,” she said. “Only a handful of people have been coming.”

Hart said he gets “appalled” at the lack of involvement and said he has invited people to attend meetings for years.

He said social media and other changes have led to a need to rethink the approach to participation.

“There are big things changing and we have to change,” he said.

Both candidates said they would like to do their part to encourage small businesses.

“We have empty storefronts that need filled,” Oldaker said.

Hart said business is his background and he has an expertise in this issue.

“I’d love to expand the corporate limits of the village,” he said.

The candidates were also asked about the issue of Riverside Recovery Services, which runs a group home in the village.

The business, which focuses on addiction issues, has come under fire from some officials in the past for opening the home in a residential neighborhood.

Hart described these critics as “NIMBY – “Not in my backyard.”

“But we should be thankful that we are able to have recovery,” he said, citing the drug issue as one of the issues motivating him to run again.

Hart said he has gotten to know four individuals who have been through recovery and have returned to work.

Oldaker said she is a close neighbor of the group home, living a block away.

“I have had no issues with anyone from the recovery center,” she said.

She said, as mayor, she would like to set up a program with Riverside, making use of those there who need volunteer hours and getting them involved in community projects.

In closing remarks, Hart said he would like to focus more on the drug issue.

“Other countries are bringing the drugs and they’ll get us without firing a shot,” he said. “We need to make changes and get our workforce back, because we’ve lost that.”

Oldaker said she would like voters to give her a chance.

“And, maybe, what Chesapeake needs is a woman as mayor,” she said.

The forums are being recorded by Armstrong Cable and will air on television and be posted online in coming weeks.

SOUTH POINT — The congregation of the Lick Creek Baptist Church is grateful that a tragedy was averted on Sunday... read more