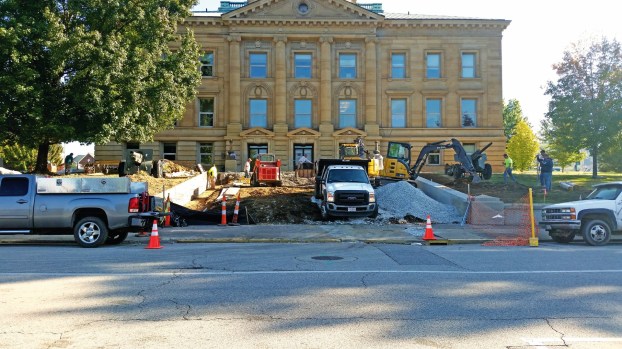 Above: A crew from the Menji Group, of South Point, works on replacing the steps to the Lawrence County Courthouse on Tuesday morning. They hope to complete the job in less than a month. (The Ironton Tribune | Mark Shaffer)

Step by step by step: Courthouse getting new steps, handicap-accessible ramp, could be done within month

Work is well underway on putting in new steps at the Fourth Street entrance to the Lawrence County Courthouse.

Crews from Menji Group were laying concrete and digging out the space for the new steps to the courthouse, replacing steps that had been there since 1971.

Jimmy Harmon, owner of the South Point construction company, said they have put in new concrete sidewalks from the parking lot to the side door of the building, put in concrete pads for the HVAC systems outside and put in some sidewalk on the Fifth Street side.

Now, they are working on the steps on the Fourth Street side, from the sidewalk to the building entrance.

“When you leave the sidewalk, there will be three steps, then a platform,” Harmon said. There will be a total of four sets of steps and platforms to the main entrance.

The crew is also in the process of putting in a handicap accessible ramp that will go from Center Street to the doors of the courthouse.

“The courthouse has never had a handicapped ramp before,” Harmon said. “So, that is going to be a great thing to have.”

The company hopes to have it all completed in less than a month.

“I hope to be done in three more weeks,” Harmon said. “Of course, it all depends if the weather is right. Everything is going great so far.”

They will also be putting in an expanded parking lot for courthouse employees.

“There will be a gate system. Everyone will have a card key to get into the parking lot,” Harmon said.

He added that he was happy that the work was subcontracted out to a local company.

“I think we should always use a local contractor on a job here in Lawrence County, if there is a contractor available,” Harmon said, adding that Tom Brooks, of South Point, was the one laying all the concrete for the project. “My whole crew is out of South Point.”

The work is part of a larger project that has seen the courthouse dome fixed and taken back to its original bronze color, a new heating and cooling system installed, new elevators installed, a new roof installed, energy-efficient lighting put in and crumbling architectural details fixed.

PROCTORVILLE — Two candidates in Chesapeake made their pitch for office on Monday, as part of the Ironton Tribune’s election... read more