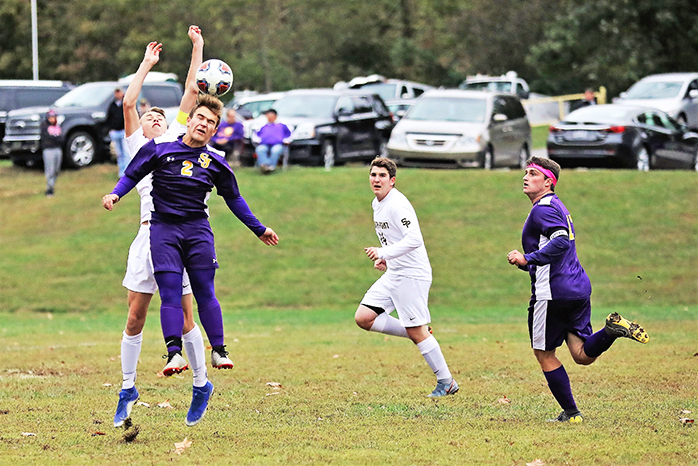 It was like a sudden death match. One game to decide the Division 3 sectional soccer tournament.
As it turned out, the St. Joseph Flyers delivered the death blow as they beat the South Point Pointers 4-1 on Wednesday.
Ryan Payne used the Halloween season to play the grim reaper to the Pointers as he pulled off a hat trick by scoring three goals to lead the Flyers.
“Ryan is one of our captains and had a standout game tonight. Ryan and Zach Roach are excellent leaders,” said Flyers’ coach Mike Balestra.
“They have been mentoring our younger players all year. This win was a by-product of their hard work and commitment to the team. Our defense played without Max Weber who was out with injury. We moved J.C. Damron in his place, who along with Andrew White, Michael Mahlmeister, and Jared Johnson had a good game.”
The Flyers got three assists from Zach Roach, Bryce Balestra and Jackson Rowe.
The Pointers only goal was by Tyler Lilly with Josh Helton getting an assist.
“Hats off to St. Joe. They flat came out to play tonight. They played physical and faster than we anticipated and for the most part had better opportunities than we did,” said Pointers’ coach Zach Jenkins.
“(Bryce) Balestra played well in the midfield for them and Payne just kept putting the daggers in us. The Damron boy really stepped up after having to move to the back line due to an early injury for them.”
Jimmy Mahlmeister had 11 saves as the goal keeper for St. Joseph while Brody Blackwell 3 for the Pointers.
The Flyers had 16 shots, seven shots on goal, 10 fouls, three offside penalties, seven corner kicks and 10 free kicks.
South Point had 16 shots, 12 shots on goal, 10 fouls, one offside penalty, five corner kicks and 10 free kicks.
“I’m proud of each and every one of our players front to back. Those Pointers played their hearts out and we knew they would, and they gave us everything we knew they would,” said Balestra.
“They are a very good team and had an excellent season. Our team talked all week about giving it your all and not leaving anything on the field when the game is over. I think both teams did that.”
After starting the season 0-3, the Pointers finished 11-6 and were second in the Ohio Valley Conference at 8-2.
“Overall, I’m proud of my guys for the season they put in. They could’ve folded on me after starting 0-3, but they stayed hungry and worked their tails off to get 11 wins,” said Jenkins.
The Pointers’ only seniors are Seth Anderson, Brody Blackwell, Ryan Goodson and Carmie McGuffin.
“I’m really excited about what the future holds for our program as we return a great deal of our roster and some core pieces. We lose four seniors and I can’t thank those guys enough for their leadership and helping me as a first-year boys’ coach.”
St. Joseph will now play North Adams at 1 p.m. on Saturday in the district tournament at Waverly.
South Point 0 1 = 1
St. Joseph 3 1 = 4
First Half
SJ — Ryan Payne (assist Bryce Balestra)
SJ — Ryan Payne (assist Zach Roach)
SJ — Zach Johnson (assist Jackson Rowe)
Second Half
SP — Tyler Lilly (assist Josh Helton)
SJ — Ryan Payne (unassisted)
Saves — SP: Brody Blackwell 11; St. Joseph: Jimmy Mahlmeister 11.
Shots — SP: 16 (12 on goal); St. Joseph: 16 (7 on goal).
Corner kicks — SP: 5; St. Joseph: 7.

Jim Walker jim.walker@irontontribune.com SEAMAN — There’s a reason the North Adams Lady Green Devils were the No. 1 seed in... read more