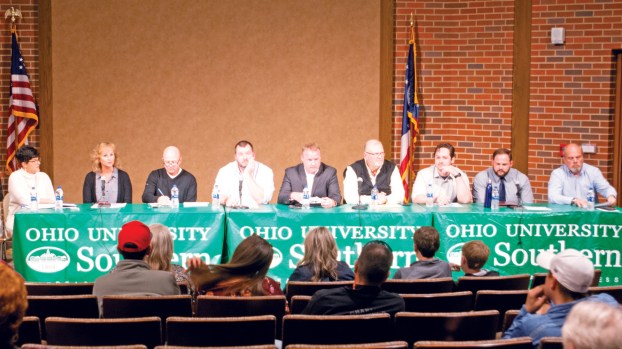 Ironton and Coal Grove mayoral and council candidates talked to the public during a forum at Ohio University Southern on Thursday. (The Ironton Tribune | Mark Shaffer)

At Thursday night’s forum at Ohio University Southern, candidates for Ironton mayor and city council and Coal Grove mayor and village council agreed that the things this area needs are economic development and repairs to infrastructure.

The candidates for Ironton mayor are incumbent Katrina Keith and challenger Sam Cramblit II. For city council are incumbents Jim Tordiff and Chuck O’Leary and the challengers are Chris Haney, Mike Pierce and Jacob Hock.

The two candidates for mayor of Coal Grove are Andy Holmes, and Gary Sherman, who was not present. The current mayor, Larry McDaniel, is not running again. The only candidate for Coal Grove Village Council present at the forum was Robin Heaberlin.

The Coal Grove candidates all agreed that the major issue priority in the village was the water system, which has had a number of issues. But the village recently got an EPA grant with principal forgiveness from the state to fix the system, starting in 2020.

“Our water is a serious issue, everyone knows that,” Heaberlin said, adding that the mayor and council are working hard fixing the issues. “I want to be a part of making sure that is accomplished and making sure the people are satisfied with the way it is done.”

She also wants to see an increase in the number of police officers and to make sure they get the training and equipment they need.

Holmes, who is on council and running for mayor, said the water distribution system is the number one priority and that number two would be economic development.

“We’ve worked hard and it will take some time to implement what the grant is for,” he said. He added that there are acres of land in the village along the Ohio River that could be developed.

“I think, with the right networking and the right solicitation, something could be done with that property,” he said, adding the village has to have infrastructure in place.

When asked about priorities for Ironton, Tordiff said his priority since he was appointed to the council a year and half ago was to find out how the public wants to proceed with Ironton’s future. He said there have been a lot of good minds on the council over the years and they have all tried to analyze the financial situation.

“When someone gets on council, they get it pretty quick. It’s not rocket science. There isn’t money to do what needs to be done, if you want to grow,” he said, adding it is up to the citizens when it comes to that. “If you want to grow, no matter what anybody tells you tonight, it takes money to grow.”

He added that, if he is elected, he would keep fees down and make taxpayer dollars work harder for the city.

Pierce said that all the problems in Ironton — financial, infrastructure, economic issues, bringing in businesses — were all webbed together.

“So, I think my priority would be to start with the most severe issue and work your way down,” he said. “You have to get the major issues fixed before you can bring businesses in.”

Hock said the city needs to be chasing more grants.

“I think economic development is the main priority and the way we do that is through the aggressive pursuit of grant funding opportunities,” he said. “And better management of city funds, not by taxing the working class people.”

O’Leary said one of the priorities should be the Ironton Police Department, which is understaffed and trying to fight the opioid crisis. He said the other issue is the separation of the city’s wastewater and sewer lines, which is going to cost the city $11 million and has been ordered by the Ohio EPA.

“I don’t know how we are going to pay for it,” he said. He added that the city has to come up with $600,000 to fix the water treatment plant. “We don’t want to be feeding our children lead and mercury like Flint, Michigan. So, we have to do that.”

The city has already spent $9 million on separating the sewers on the north end of town and is facing the issue of coming up with millions to fix the sewage plant.

Cramblit said, if he is elected, economic development will be that main priority. He said the solution is making Ironton more marketable by addressing infrastructure issues.

Keith said that, when she took office, she too thought that it was all about economic development. Then she had to deal with the millions of dollars fixing the sewer system with no funding from the state or federal government.

“Is economic development a priority? Yes. And that is what we have been working toward,” she said. “JobsOhio looked at me and told me that businesses would not come here if you are not in compliance with EPA.”

She said they have spent the past four years dealing with EPA violations and infrastructure issues and other things that are not popular “but they are necessary to make our city go forward.”

When asked about the next four years, Tordiff said that economic development is not the job of city council and the mayor. He said most businesses do not want to deal directly with politicians, because they will leak out details for political gain. That is why counties and cities use economic development corporations and port authorities.

Haney said that, if elected, he would look into the issue of leaks in the water system and water meters that don’t work. He said that he was told that as many as one/seventh of the meters don’t work and, thus, people aren’t paying for water and sewage.

“That is totally inefficient and neglectful,” he said, estimating the city is losing $300,000 annually.

Pierce said they have to create a plan for the issues in Ironton. He said there is anger from people who know the problems and feel that the city council isn’t listening to them. He said it was time for “a new approach and new faces and new ideas, perhaps.”

Hock said there is a lot of negativity and that everyone knows the city’s financial problems, but “I don’t think the solution is placing a burden on the 25 percent of citizens that are paying income tax.

He said people have to ask why they are keeping the same individuals around.

“I want to see more young people getting involved and more positivity,” he said.

He said he has approached companies about coming to Ironton, but they are turned over to the LEDC since they control the land and things like tax abetments.

He also pointed out the city has fees because they cannot submit a budget that has deficits.

“I want to pass an income tax to invest in our community to prepare our infrastructure and the economic climate to invite people in,” he said.

Cramblit said he would like to keep the burden of fees and taxes off the citizens.

“I think we have to dig deep into the budget and see what savings we can find in there,” he said. “We have to change the ‘It’s not my job’ culture. We have to take ownership of what we were elected to do.”

Keith said there is a lot of talk about economic development but there is no plan.

She said that she has got a grant for people outside Lawrence County to come in and look around the community and then develop a five year plan which includes an economic development component.

“We’ve got to look at our industrial and commercial properties,” she said.

Holmes said that, in four years, the water system in the village will be fixed.

“I think the biggest thing we can implement in Coal Grove is preventative maintenance solutions for our water distribution system,” he said, pointing out the water lines haven’t been flushed in years which leads to build up of minerals.

He said he would also like to take advantage of the traffic from Ironton on Marion Pike, which is “off the charts” compared to the population of the village.

“We have a vacant lot right there and I think in my four years, we can get something there, like a nice sit down restaurant,” he said.

Heaberlin said she agrees that the water issue will be taken care of in four years, but another issue is paying for it.

“I’d like to see re-budgeting so we can pay for it without passing it on to the people,” she said. She also wants to make Coal Grove more marketable.

The forum was recorded by Armstrong Cable and will air on television and will be posted online in coming weeks.

ROME TOWNSHIP — Students in Lawrence County schools are getting a little extra help this week with their writing assignments.... read more