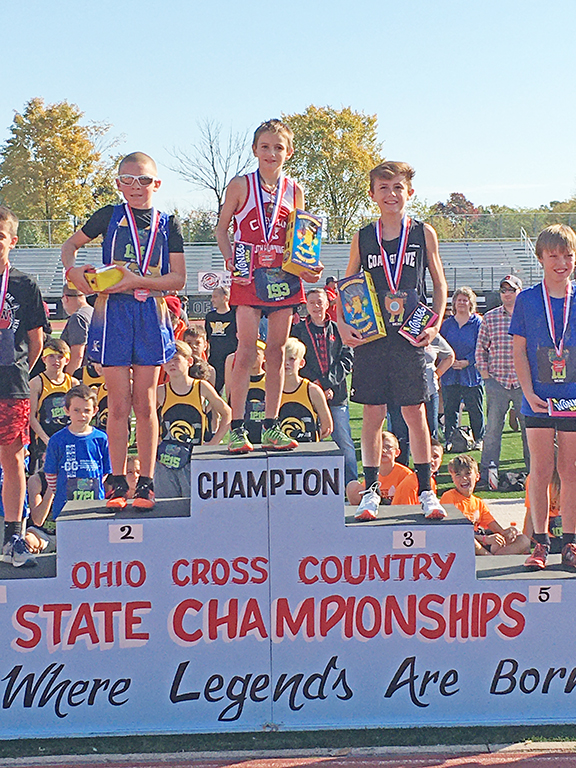 COAL GROVE — Middle School students can be silly and playful. One Coal Grove Middle School student has his own way to “Hamm” it up.
Seth Hamm’s antics as a middle school student include hard work, dedication and lots and lots of running.
All that kind of “crazy” behavior got him was a third-place finish in the 13th annual Ohio Middle School and Elementary cross country state championship meet held on Sunday at Dublin Jerome High School.
The 11-year-old Hamm used his hard work, motivation and many hours of training to run an 11:40 time over the 2-mile course against 231 sixth grade students — the largest field of runners at the state meet in that boys’ division.
The top three finishers were separated by only 3.59 seconds. Hamm got a bronze medal as his serious prize and then a 5-pound Gummy Bear for the kid inside him.
Hamm’s preparation for the state meet consisted of local races at Ironton, Rock Hill, Fairland, Ashland, Ky., and Boyd County, Ky. Hamm finished first in all five races.
The state meet attracted 1,691 runners from each county of Ohio’s 88 counties. Portsmouth Middle School’s Charles Putnam — the Ohio Valley Conference champion — was fourth in Division 2 of the boys’ middle school race with an 11:12 time. The race consisted of 140 runners.
Jansyn Smith of River Valley was sixth in the sixth-and under boys’ race with a 12:14 time.

Harbaugh tells parents he will stay at Michigan