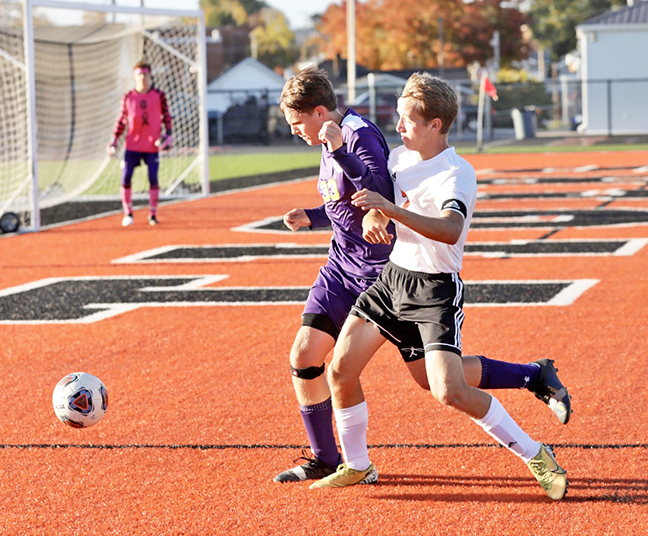 WAVERLY — If it had been a 12-found title fight, the St. Joseph Flyers would have made it to the 12th round.

But the South Webster Jeeps still had enough punching power in the final round to break a scoreless tie and beat the Flyers 2-0 on Thursday in the Division 3 district championship game.

“This was a very good game. South Webster is a premier program in the Southeast district. They have several talent players on the front line and in the midfield,” said Flyers’ coach Mike Balestra.

“We kept them scoreless for 60 minutes. However, they maintained possession most of the second half.”

The game was scoreless until midway through the second half when Trae Zimmerman scored off an assist from Gabe Ruth with 59:41 on the clock.

The Jeeps then second with 66:04 left on a goal by Ruth with an assist from Braden Martin.

St. Joseph goalkeeper Jimmy Mahlmeister had 12 saves as the Jeeps had 14 shots on goal and 30 total shots.

The Flyers had four shots — all one goal — with game played mostly on the St. Joseph third of the field.

The Flyers finish the season with an impressive 16-3 record and with the Southern Ohio Conference Division 1 championship.

“It was a great experience for our team. We will return nine starters next year and hope to improve on our success this year,” said Balestra.

“It will be hard to replace our two senior captains Ryan Payne and Zach Roach. They have given a lot to our program. Our kids look up to them and feed off their energy. This year has been our best team and the seniors helped to set the tone.

“Ryan has really improved his game the past two seasons and became one of our better offensive players. Zach works as hard as anyone and he leads by example. Nobody plays harder than him.”

South Webster (15-3-1) won their fourth straight district and will now advance to the regional tournament to play Lynchburg-Clay at 7 p.m. next Wednesday.

Ohio State hopes to rebound after up and down season