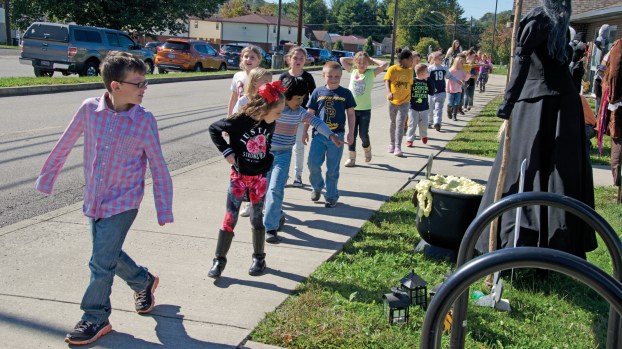 Scarecrows showcase students’ love of reading: Display will be up for today’s Halloween parade

SOUTH POINT — Visitors to South Point Elementary School are being greeted by a wide variety of characters when they enter the school this week.

The front sidewalk is home to 20 scarecrows, made by each of the school’s classes.

“They each picked a book and made one,” assistant principal Bill Christian said of the display.

On Wednesday, they went up for the first time and classes took turns touring the full display.

Christian said a judge from the community will come and pick the best.

He said they will be up for public viewing through the week, including the school’s annual Halloween parade today.

The parade steps off at 1 p.m. and the public is invited to come and watch the students, who walk the streets surrounding the campus.

In addition to students, the parade usually includes others, such as the El Hasa Hillbilly Shriners and the high school marching band.

Small Business Saturday will return to downtown Ironton on Nov. 30 and besides getting a chance to shop local, there... read more