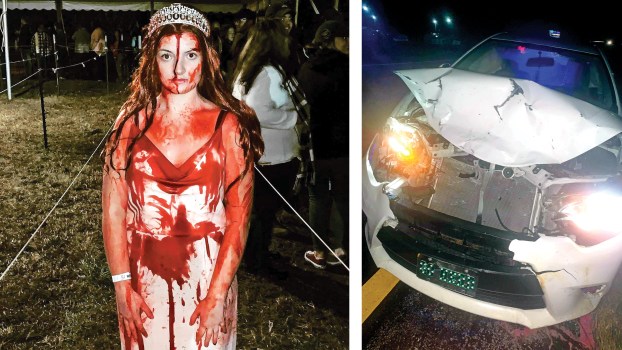 Sidney Wolfe in character as Carrie White from “Carrie: The Musical.” She dressed up in character at the Fallsburg Fearplex on Saturday to promote the Paramount Arts Center show, which opens tonight. Wolfe’s car after it collided with a deer on a highway by South Point. The story of her scaring first responders because of the fake blood went viral across the internet and TV. (Submitted Photos | Sidney Wolfe)

SOUTH POINT — An accident in South Point involving some fake blood and a deer has made a Marshall University student into a viral sensation and got Sidney Wolfe dubbed “The Queen of Halloween.”

On Friday night, Wolfe was headed back home to Huntington, West Virginia after being at Fallsburg Fearplex to promote “Carrie: The Musical,” which starts tonight at the Paramount Arts Center in Ashland, Kentucky. She had dressed as the titular character Carrie White in a white prom gown and fake blood from her tiara to her toes.

Wolfe was driving through South Point when a deer ran in front of her car and they collided. The car’s airbag deployed and the front end was smashed in. Wolfe was okay, she just had a bruise on her right leg from hitting the steering wheel.

However, since it was late, she had just changed out of her costume into regular clothes but was tired and decided she was going to wash the prop blood off once she got home.

Unfortunately for the good Samaritan who stopped to see if she needed help, he wasn’t aware that she was fine and the blood was fake.

“He was freaked! He saw my face and immediately said, ‘Hold on, hold on,’” she said. “I was kind of caved in my car and I was trying to motion that it was just make up. I think he took it as more that I need help.”

Soon after, four ambulances arrived on the scene and the first responders were understandably weirded out by seeing Wolfe.
“Them walking up to me and seeing my face was priceless…they were freaked out,” Wolfe said. She assured them that it was make up and then they found it funny because, earlier in the day, they were talking about dealing with an accident and someone having on makeup and how they would react.

The concerns for Wolfe’s health continued when police arrived on the scene.

“I was out of the car and standing and talking. No one filled them in. One of the officers eventually said ‘OK, I’m just going to address it — Why aren’t we getting her medical attention? She’s really bad,’” Wolfe said. “We explained that it was Halloween and then they got a kick out of it.”

The next day, Wolfe posted a picture of her car and her dressed as Carrie on Twitter. It got 100 likes in the first hour and then in the next hour, she got 400 likes.

When she woke up the next day, it had exploded to 250,000 likes and then the story got picked up by BuzzFeed, the Huffington Post.

On Wednesday, Wolfe was talking to the TV show “Inside Edition” and a friend sent a message that Ryan Seacrest had shown her picture on “Live with Kelly and Ryan.”

“It’s really been blowing up,” Wolfe said. “I think it is something that is making Halloween better, a lot of people are getting a kick out of it,” Wolfe said.

Wolfe is finding the whole viral thing kind of hilarious.

“A lot of people said I am the Halloween Queen. Someone said ‘That’s it, the competition is over, she won Halloween.’ My favorite was someone who knew it was ‘Carrie: The Musical’ called it method acting at its finest.” Wolfe said of the comments she has gotten online. “People are just being really funny about it. So, I changed my Twitter bio to ‘Miss Halloween 2019’ because I thought it was hilarious.”

Wolfe is a junior at Marshall and is studying accounting. She also sings in the MU Chamber Choir and generally acts in a play a year, just for fun.

The ironic part of the whole situation is that Wolfe doesn’t even play Carrie in “Carrie: The Musical.”

“I play Sue Snell, the person who is the narrator and the one who walks you through the show,” Wolfe said. “Kate Jackson, who is playing Carrie, was ill that night and asked if I could fill in for her that night. I said ‘Absolutely.’ I just wanted to get dressed up as Carrie because it was going to be fantastic. If you are going to have an opportunity to have blood poured on you, you take it.”

Wind gusts, showers expected with front   The weather may be warm when you wake up Thursday, but don’t... read more