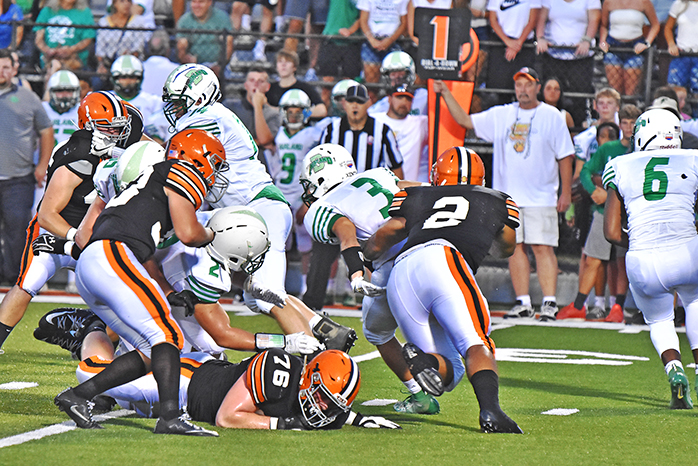 It’s Championship Week Part II.
After smashing the Gallipolis Blue Devils 52-0 last week to clinch at least a share of the Ohio Valley Conference championship, the Ironton Fighting Tigers still have some work to do.
Ironton will host the rival Portsmouth Trojans on Friday and the visitors need a win to earn a share of the league title and throw it into a three-way tie if Gallipolis beats South Point as expected.
Both teams are 8-1 with Ironton 6-0 in the league and Portsmouth 5-1. The Trojans only loss was 45-28 at Gallipolis in week five.
The Fighting Tigers don’t want to get caught with an emotional letdown like last season. After a heartbreaking 36-33 loss to Gallipolis in the closing seconds, Ironton went to Portsmouth and took a 21-7 lead at halftime only to watch the Trojans rally in the second half and win 35-28.
Ironton coach Trevon Pendleton doesn’t see any chance of a letdown.
“You don’t have to get these kids up for this game. It’s a rivalry. It goes back a long time all throughout their families. It’s in their blood.,” said Pendelton.
“They don’t like Portsmouth and Portsmouth don’t like us. We’re going to respect them and we’re going to attack them this week like we would any other week and come Friday night we’re going to get after it.”
The game also carries huge playoff implications. Ironton has already locked up a home game but can clinch the Region 19 title with the win.
Portsmouth is sixth in the region and should still qualify with a loss, but the Trojans would probably drop to the seventh or eighth spot and maybe make a return visit to Ironton for the first round of the playoffs.
“We’re fortunate to be part of this rivalry. The history behind this and the history behind the two programs. Our program is bigger than any of us,” said Trojans’ coach Bruce Kalb.
“To get to play in a rivalry as rich as Ironton, what an experience that is. And we have a chance to play for a home (playoff) game.
“We have a chance to play for a league title. The atmosphere is always electric when it comes to Portsmouth and Ironton regardless of records. What a game to be part of.”
Of course, when talking about Portsmouth the name of senior running back Talyn Parker (5-11, 195) always enters the conversation. Parker broke his father Jo Jo’s career rushing record of 5,514 earlier this season.
The younger Parker currently has 1,262 yards on 117 carries this season and has now surpassed 6,000 career rushing yards.
One thing that has helped take some pressure off Parker is the Trojans’ passing game. Sophomore quarterback Drew Roe (5-8, 135) is 80-of-138 for 1,304 yards and 15 touchdowns with just three interceptions.
“Parker is still putting up some pretty good numbers. You can’t just put nine in the box, in some cases 11 in the box. You can’t say the ball’s going to Talyn Parker so tackle Talyn Parker and you’re good to go,” said Kalb.
“We wondered if we could line the ball up and run right at people. That was our M.O. last year. They were boxing it in. People are going to look at us,” said Kalb.
“Roe came into his own this year. We saw he had the ability to be a playmaker. We had some playmakers in Bryce Wallace and Eric Purdy. We’ve had some guys step up and do a great job.”
Roe’s main targets are seniors Bryce Wallace (6-2, 155) and Eric Purdy (5-8, 153). Wallace has 23 catches for 459 yards and Purdy 30 grabs for 446 yards.
While Portsmouth’s offense has been able to score thanks to Parker and company, the defense has given up yardage and 183 points including 134 in the league.
Their defense will be heavily tested against Ironton which has a plethora of weapons.
Leading the offense is junior running back Reid Carrico with 888 yards on 116 carries and 16 touchdowns. The Ohio State commit also leads the team with 15 receptions for 332 yards and three more touchdowns.
Senior quarterback Gage Salyers is 54-102 passing for 1,032 yards and eight touchdowns with four interceptions.
Senior fullback Seth Fosson has 42 carries for 287 yards — a 6.8 yards per carry average — and he has scored twice.
Ironton’s defense pitched its third shutout last week and has allowed just 49 points on the season and a mere 27 in the OVC.
Kalb said Ironton’s defense is better than last season.
“Carrico has gotten a lot of attention and rightly so,” said Kalb. “Gage Salyers the quarterback is a phenomenal athlete. Seth Fosson, you have to know where that young man is. Junior Jones has been phenomenal for them. I’m watching the Gallia game and they bring out a kicker who is phenomenal. Their special teams’ play is better. They’re a well-rounded team with a lot of weapons.”
The main three on the defensive line of senior Junior Jones, sophomore Nate Cochran and Fosson has made it difficult for teams to run the ball and they have also gotten plenty of pressure on opposing quarterbacks.
The defensive line play is backed by a strong group of linebackers led by Carrico and Gunnar Crawford inside with the hard-hitting Cameron Deere and Dalton Crabtree or Jordan Grizzle on the outside.
Depending on the offensive set, Crabtree will shift up to defensive end and Grizzle will move into the secondary if needed.
The secondary has Collin Freeman, Salyers and Kyle Howell.
Kickoff is 7 p.m.

Dawson-Bryant High School’s performance at the 2019 Buckeye Classic was titled “Like a Diamond in the Sky,” and, at the... read more