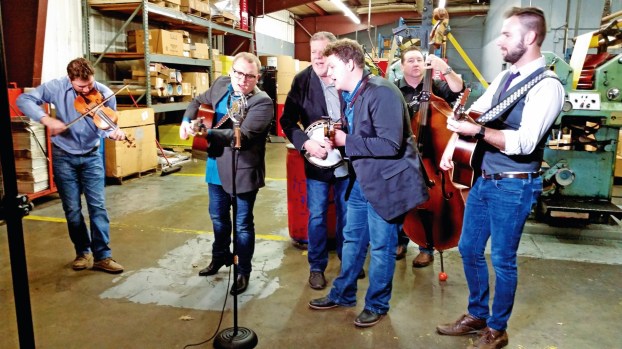 On Friday afternoon, the bluegrass band Sideline stopped by and performed their award-winning song, “Thunder Dan,” for a Press Room Recording session at The Ironton Tribune.

Sideline, of North Carolina,  was formed six years ago by Steve Dilling (banjo), Skip Cherryholmes (guitar) and Jason Moore (bass). They were later joined by Daniel Greeson on fiddle, Bailey Coe on guitar and newcomer Zack Arnold on mandolin.

They are all long-time veterans of the scene and the band recently won an International Bluegrass Association Song of the Year award for their song, “Thunder Dan,” which was written by Josh Manning, of Ashland, Kentucky. The song also took the top spot on Bluegrass Today’s Most Played of 2018.

While Sideline has deep bluegrass roots, they also incorporate sounds and ideas from other genres of music make a more dynamic sound.

The band was in town to perform a concert at The Elks Club on Friday night. They are in the midst of 125 city tour that will take them into Canada and Ireland.

Press Room Recording is collaboration between the newspaper and Armstrong Cable, which sponsors and films the videos, which are recorded in by the newspaper press in The Ironton Tribune’s office in Ironton.

Artists or bands that are interested in being a part of Press Room Recordings can contact Simmons at sarah.simmons@irontontribune.com for consideration.

An Ironton author hosted a launch for party for her latest children’s book on Monday. Vicki Roach, who owns and... read more