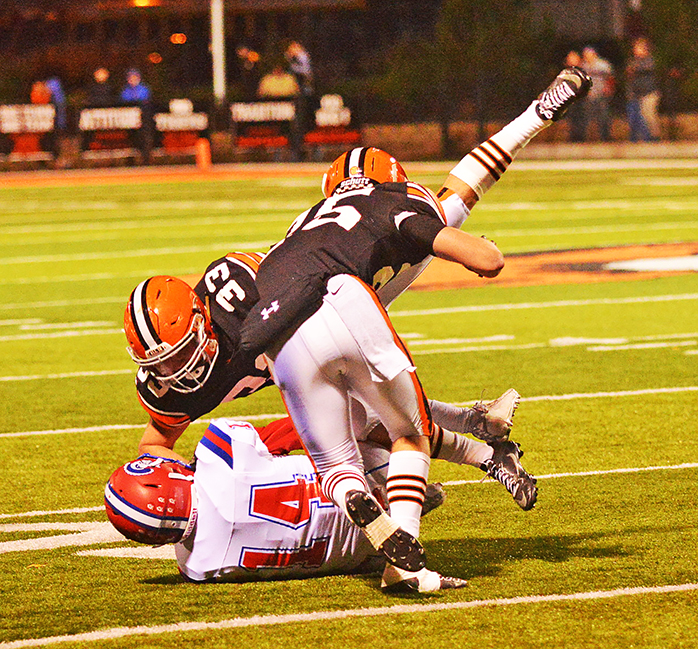 So much for another showdown.
Ironton turned last week’s showdown for the Ohio Valley Conference lead into a 52-0 laugher against Gallipolis and this Friday it was a game against the second-place Portsmouth Trojans who needed a win to throw the race into a three-way tie.
Friday’s showdown turned into another easy win for the Fighting Tigers as they routed the Trojans 48-7.
Ironton is now 9-1 and finishes 7-0 in the OVC for their third outright league title in five years. Portsmouth is 8-2 and 5-2.
“It’s every aspect of the game from top to bottom. I can’t thank these guys enough. They show up to work every day all the way from out scout team guys to our third team and our second team and our starters,” said Ironton coach Trevon Pendleton.
“It’s definitely a fun group to be a part of. Everyone is working in the right direction and it’s just a fun team to coach.”
The Fighting Tigers clinched first place in the Division 5 Region 19 playoff ratings and will host a first-round game next Saturday. The Ohio High School Athletic Association will announce official pairings on Sunday.
Unofficially, Ironton will play Wellston, Wheelersburg host Portsmouth, Minford visits West Lafayette Ridgewood and Amanda-Clearcreek entertains Columbus Academy. All games will be a 7 p.m.
Ironton rolled up 436 total yards including 295 rushing led by Reid Carrico with 99 yards on 13 carries and a touchdown and Seth Fosson 63 yards on just five carries and two TDs.
Quarterback Gage Salyers was 3-of-7 for 141 yards and two scores.
The Fighting Tigers defense dominated again by holding Portsmouth to 197 total yards with 130 coming on the ground.
All-Ohio running back Talyn Parker still managed to run for 108 yards on 18 carries and scored the Trojans’ lone touchdown.
“I think it’s a testament to our depth. Our practices, they get intense. We’ve got guys on both sides of the ball that are flying around and making plays,” Pendleton said of the defense.
“We’ve got guys who can start at all kinds of different places but they are here because they want to be Fighting Tigers and we’re lucky and thankful to have them.”
The teams traded turnovers to start the game except Ironton got the better end of the exchange.
Ironton fumbled on the first play of the game and Portsmouth recovered at the Ironton 18. But on third-and-7, Ironton’s Kyle Howell intercepted a Drew Roe pass at the 5-yard line and returned the ball for 95 yards for a pick six.
Avery Book’s kick made it 7-0 with 10:44 on the clock.
Portsmouth used a 35-yard pass from Roe to Eric Purdy to get to the Ironton 35 and the drive continued to the 19 only to have Roe stopped for a 2-yard loss on fourth-and-6.
After two Carrico runs for 10 yards, Salyers threw a perfect pass to Trent Hacker that covered 69 yards for a touchdown and a 13-0 lead.
Salyers came up with an interception and Ironton had the ball at the Trojans’ 42 but the drive stalled at the 29.
Ironton stopped another Portsmouth drive at the Fighting Tigers’ 38. Ironton then went 62 yards in seven plays capped by Fosson’s 14-yard scoring run as he bounced off a tackler and kept running for a 20-0 lead.
The defense forced a punt and got the ball at its own 33. This time it took eight plays and it was Fosson slipping a couple of tackles and racing 24 yards for a touchdown and a 27-0 lead with just 49 seconds left in the half.
Portsmouth avoided the shutout with a 69-yard, six-play drive capped by Parker’s 41-yard scoring burst with 8:50 on the third quarter clock.
Ironton answered quickly with a score on the first play after the kickoff.
Salyers hit Jordan Grizzle with a short 5-yard pass and Grizzle made a move to the outside and down the sidelines for a 67-yard scoring play and a 34-7 lead.
Salyers picked off a deflected pass on Portsmouth’s ensuing play that set up a 59-yard, 10-play drive capped by Carrico’s 1-yard run. Carrico had an 18-yard run to set up his touchdown and it was 41-7.
Ironton’s backups capped the scoring when Trevor Carter scored on a 12-yard run with 1:22 to play and Izsak Unger booted the conversion to set the final score.
Portsmouth 0 0 7 0 = 7
Ironton 13 14 14 7 = 48
First Quarter
Irn — Kyle Howell 95 interception return (Avery Book kick) 10:44
Irn — Trent Hacker 69 pass from Gage Salyers (kick failed) 4:31
Second Quarter
Irn — Seth Fosson 14 run (Avery Book kick) 7:30
Irn — Seth Fosson 24 run (Avery Book kick) 0:49
Third Quarter
Prt — Talyn Parker 41 run (Joel Bowling kick) 8:50
Irn — Jordan Grizzle 67 pass from Gage Salyers (Avery Book kick) 8:33
Irn — Reid Carrico 1 run (Avery Book kick) 4:25
Fourth Quarter
Irn — Trevor Carter 12 run (Izsak Unger kick) 1:22
——
Prt Irn
First downs 10 19
Rushes-yards 28-130 45-295
Passing yards 67 141
Total yards 197 436
Cmp-Att-Int 11-20-3 3-7-0
Fumbles-lost 0-0 1-1
Penalties-yards 6-55 8-95
Punts-average 3-26.3 1-32.0
——
Individual Leaders
RUSHING — Portsmouth: Talyn Parker 18-108, Drew Roe 8-20, Donavon Carr 2-2; Ironton: Reid Carrico 13-99, Seth Fosson 5-63, Gage Salyers 7-41, Cameron 7-30, Kyle Howell 1-8, Trevor Carter 6-43, Dalton Crabtree 1-5, Beau Brownstead 1-2, Jacob Sloan 2-7, Kameron Browning 2-minus 3.
PASSING — Portsmouth: Drew Roe 12-22-3 67; Ironton: Gage Salyers 3-7-0 141.
RECEIVING — Portsmouth: Bryce Wallace 3-13, Eric Purdy 4-42, Michael Duncan 1-7, Talyn Parker 3-1, Tyler McCoy 1-4; Ironton: Trent Hacker 1-69, Jordan Grizzle 2-72.

The Symmes Valley Vikings celebrate a 22-16 come-from-behind win over the Northwest Mohawks on Friday to win the Southern Ohio... read more