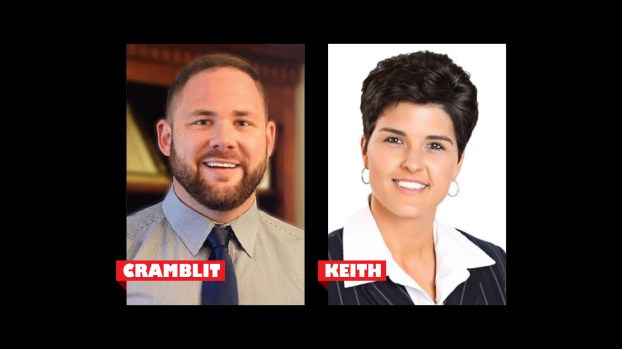 Court has yet to rule on Keith’s suit

“I’m extremely humbled by that,” Cramblit said of the turnout. “I’m really thankful for the support and everyone coming out to support our vision of the city.”

Cramblit said he and the three new Ironton City councilmen, Chris Haney, Mike Pierce and Jacob Hock ran campaigns on change for the city of Ironton.

“There have been a lot of people around town that gave us confidence and we are embracing that change,” Cramblit said. “When you win by that kind of margin, you know you have support and it is remarkable.”

They will all take office at the end of December.

Cramblit said he will would like to build a new culture within the city government.

He said his first order of business is meeting and getting to know all the city employees and assuring them that he supports them.

“I just want a new culture, one where it is not ‘us versus them,’” he said. “I am just extremely excited and want to start moving Ironton forward.

Still in play is a suit that Keith filed with the Ohio Supreme Court on Oct. 28. The suit claims that Cramblit has not been a resident of Ironton for five years before the election, as required by the city’s charter. He has put out city tax returns for the years 2014-2018 and driver’s license applications from 2009, 2012 and 2016, all with an Ironton address.

Keith’s suit says that the Lawrence County Board of Elections, in certifying Cramblit’s name to the ballot, was exercising “judicial or quasi-judicial power” and that was “unauthorized by law, had “abused their discretion and acted in clear disregard of the applicable legal provisions” and that Cramblit’s name should not have been on the general election ballot because he is not qualified under Ironton City Charter. The board certified Cramblit to the ballot in August.

It goes on to say that the board’s actions resulted in injury to Keith “and others for which there is no plain and adequate remedy in the ordinary course of law.”

The Lawrence County Board of Elections issued a statement on Friday that although there was some confusion, the votes would be counted and reported the same as any other race.

In their response, the board of elections denied many of the allegations. In their defense, the response says that the board acted “acted in accordance with the Constitution of the State of Ohio, all Ohio statutory provisions, and all state and local laws relative to this action.” It also said Keith “has available to her other adequate remedies in the ordinary course of law” and “has failed to comply with Ohio Revised Code section 3513.263.10.”

It also said the board is prohibited from invalidating any nominating petition after the 60th day prior to the election at which a candidate seeks election to office pursuant to Ohio Revised Code section 3501.39(C)(1).11. It also called for the case to be dismissed.

The Ohio Supreme Court had not ruled on the case as of Wednesday afternoon.

Recount, drawing may occur if results stay even CHESAPEAKE — While most of Lawrence County had to wait until early... read more