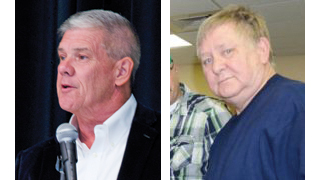 SOUTH POINT — South Point Mayor Jeff Gaskin won a solid victory for a second term in the village of South Point on Tuesday.

With all precincts reported, he led his opponent, former village worker Fred Craft, 76 to 22 percent, with 2 percent in undervotes.

“I am elated,” Gaskin said. “I had so much help from my family and friends. It was overwhelming. I think the vote here really shows what the people of South Point wanted.”

The race had at times been heated. Craft had campaigned primarily on social media, posting a series of videos making claims about village operations, while Gaskin took his message to candidate forums.

“We ran a very positive, forward-thinking race,” Gaskin said. “And this shows that you can’t win an election with negativity, sensationalism, drama and whining.”

In Proctorville, incumbent Mayor Rick Dunfee won an easy re-election to a third term, winning 70 percent of the vote over opponent Jerry Thompson’s 28 percent, with two percent in undervotes.

“Just a big thank you,” Dunfee said, when asked what he wanted to say to voters. “And we’ll keep the plows a-rolling.”

He said a priority in his next term would be the village’s water lines.

“We’ll continue looking for money on that,” he said.

He said the budget is always a concern.

City council will have three new members Members of the Ironton City Council have spent the better part of 2019... read more