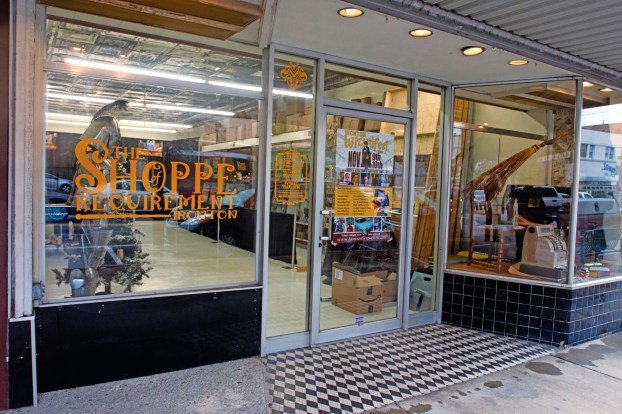 As part of the second Ironton Wizardfest the old Staley Pharmacy building was turned into the Shoppe of Requirement. The store has been decorated to reflect the Harry Potter movie universe. The festival is Saturday and Sunday. (The Ironton Tribune | Mark Shaffer)

The magic returns: Wizardfest will be this weekend in Ironton

On Saturday and Sunday, Ironton’s downtown will turn into a wonderland of magic when Ironton Wizardfest returns for a second year.

Brad Bear, one of the organizers of the event, sees it as a celebration of all things Harry Potter combined with things more associated with Appalachian traditions.

“Our festival is different because it is not a street festival and it is not a comic convention, it is a hybrid of the two,” he said. “Wizardfest, in a nutshell, is an Appalachian fall festival with a storybook theme.”

He said it has all the trappings of an Appalachian festival, with broom makers, vendors selling hand-crafted items, blacksmiths, apple cider made in the traditional way over fire, beans and this year, a glass blower.

“We have all of those things going on and then you add the element of the Harry Potter fan festival and that gives us a great excuse to play,” Bear said. Some of the elements of that playfulness is the festival partnered with The Ironton Tribune to print editions of the Potter-themed Ironton Prophet newspaper. They even got old newspaper boxes and put logos on them to blend into the make-believe world.

“This allows us to have a community festival that is truly family friendly but it’s not just for kids,” Bear said. “Everyone can enjoy it.”

To make the transformation into the world of Harry Potter, there will be large striped tents on Third Street and some local businesses like Unger’s Shoes have displays with Harry Potter-related items, including a display of socks with a sign that says “Free Dobby.”

And the old Staley Pharmacy building has temporarily been transformed into two-themed event places, one side is a classroom setting and the other is the Shoppe of Requirement, which while it doesn’t actually sell anything, holds cursed objects, brooms, bottles and other items of interest.

Bear said Peyton and Walles will do an improv performance, mashing Harry Potter with other genres.

Rankin will do a question and answer session with fans as Percy Weasley.

As is common at fan festivals, the actors will be signing autographs and will be available for photos, but that is an additional charge.

“The autographs and the photo op do cost extra, but that is to help offset the cost of them traveling here,” Bear said. “We are keeping it as reasonable as humanly possible. It is not going to be really expensive.”

The Q&A and the performance will be open to the public.

The festival will take over a large part of Third Street, with the festival area going from the Ro-Na down to the Ironton City Center building, which will also be used for events. It will also use part of Vernon Street next to the City Center.

The Barker Farm will also be back with their magical beasts, including Daniel the camel and Quincy the monkey.

Bear said that from the pre-sale of tickets, they are expecting families from Cleveland, Pittsburg and a lot of people from Indiana and Ohio to be in town this weekend. Last year, around 3,000 people attended.

“So, with this many people in town, it really just gives us an excuse to bring everybody together and say ‘Let’s just have fun,’” Bear said. “We want the vendors to have just a good of a time as the attendees. We really just want this festival to be a great experience for everyone.”