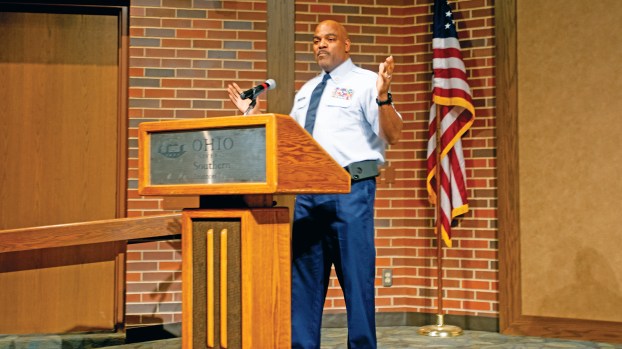 Every year, Ohio University Southern has a ceremony to honor veterans. Not only is it a tradition, it is because so many at OUS either served or had family who served in America’s military.

Outside the Bowman Auditorium on Thursday, there was a Tribute Wall covered with photos of students and staff who served or their family. The photos attracted the attention of staff and students who, in many cases, barely recognized familiar faces that had changed since their time in service.

“We want to bring awareness that we do have a lot of veterans, who are not only employees or students but family members of staff and students,” said Teresa McKenzie, OUS Veterans Service coordinator and accessibility coordinator and a U.S. Air Force veteran. “That is why we do the Tribute Wall, because we want everyone to know we have a huge military family. I am proud of the fact my picture goes up on the wall with all these other veterans from World War I to the Iraq and Afghanistan wars.”

Members of Ashland’s Paul G. Blazer High School Junior ROTC carried flags into the auditorium and later demonstrated the flag folding ceremony and explained all 13 steps to folding the flag into a triangle and what each of the movements represented.

This year’s keynote speaker was Stanley McDonald, a senior master sergeant who retired from the U.S. Air Force after 26 years of service. He now resides in Ashland, Kentucky where he is the pastor of the New Hope Baptist Church, as well as the transportation director of the Ashland Independent School District and is in many local non-profit groups.

He said, as a preacher, he was more used to talking about God, not talking about and to veterans, but he said he decided to talk about what was important to him and how being in the military was good for him.

McDonald said that one thing that being in the military taught him was that the team was only as good as its weakest link.

“That is one thing about Veterans Day… we are all in this together,” he said. “Being a veteran is a privilege. I was part of something that less than one half of one percent of our population raised their hand and said ‘I will do this.’ They wore the uniform and they did it proudly.”

McDonald said, before joining the military, he went to college but found himself skipping class and wanted to do something more with his life. He said once he joined the U.S. Air Force, he realized he was a part of something bigger than him.

“That’s what got me, when I realized what we stood for and why we did what we did,” he explained. “I said ‘I am all in.’”

He said that many people never realize what it took to have those freedoms.

“That is why Veterans Day is so importan. Most people don’t know what we go through for us to get up and go to school and not worry about going down war-torn streets,” McDonald said. “That is because of all the veterans who served our country, those veterans who gave it all up just so they could continue to fight the good fight of faith.”

In his 26 years, McDonald served on bases around the world with his final posting being in South Korea.

“And no matter where I was stationed at, there is no country like our country. Our democracy we have exceeds every other democracy out there,” he said. “So it is worth fighting for and truthfully, it was worth dying for.”

The event ended with a moment of silence lead by OUS student Hunter Schafer, who is a U.S. Army veteran.

McKenzie is the person to talk to about what OUS offers veterans and military-affiliated students.

“I help them if they have questions about paperwork for their GI Bill. I serve as an advocate for them if they are having issues,” she said. “I am a liaison with the VA.”

A South Point man was arraigned on a rape charge on Wednesday. Joshua J. Kerns, 28, was indicted on one... read more