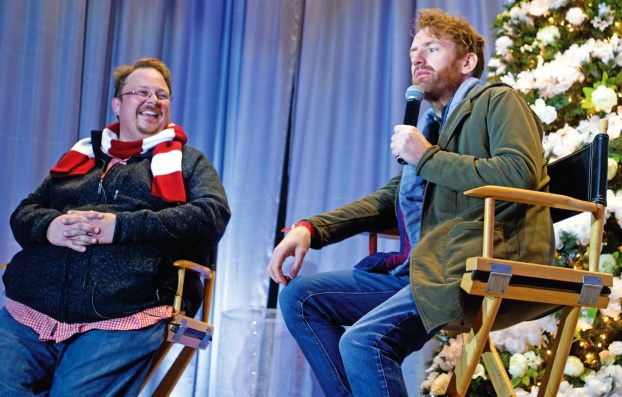 Wizardfest organizer Brad Bear looks on as actor Chris Rankin, who played Percy Weasley in the Harry Potter movies, takes questions on Saturday at the Ro-Na Theater at the Ironton Wizardfest. (The Ironton Tribune | Mark Shaffer)

Wizardfest brought hundreds of Harry Potter fans to downtown Ironton over the weekend and organizer Brad Bear said the festival is growing.

“We learned a lot last year and it paid off,” he said of the effort to put together the second year of the festival. He said they took note of what worked and what did not in the inaugural year and made changes to improve things for this year.

“The attendees are the ones who determine how it flows and moves,” Bear said. “And it’s been going great. The weather is so much better than last year.”

Attendees were not limited to just locals.

Kirsten Lovell, from Columbus, brought her children, Finley and Rowan, to Lawrence County to take part. She said they had been having a great time.

“It’s our first time here,” she said, stating they found out about the event through social media. “We saw it and found out after we missed last year.”

In addition to expanding into the city center and other storefronts this year, Wizardfest was able to bring in three actors from the Potterverse films.

Hamonde and Payton performed an improvisational comedy show in the Ro-Na Theater on Sunday, showing off their timing and acting abilities, basing the act on audience suggestions.

While Rankin hosted a question and answer session the preceding day. He said he was happy to be in Ironton, because, as opposed to when he goes to fan conventions in places like Orlando or Chicago, it feels to him like he could be anywhere in America.

“It is nice to actually come to a real place,” he said, to the amusement of the crowd. “A real town where people do normal things. It’s not full of tourists with cameras, sightseeing. It’s real America, it’s lovely for us. And it looks like a film set, so it’s delightful. I feel like I’m in ‘Back to the Future.’ It’s great.”

The first question was if he still hangs out with the rest of the Harry Potter cast.

“I do, actually,” Rankin said, adding that when he goes to fan conventions, about three times a month he sees somebody he was in the film with. “It’s really nice because we get to go to cool places like Ironton and hang out.”

He said in some cases, it is like when you leave high school in that he sees some of the people frequently and others he is just social media friends with.

“They’re good people and it is a special thing, Harry Potter, we all went through and it was a very unique thing to go through,” Rankin said.

In the entrance to the Ro-Na was Stormy Gibson, director of Education for the Ohio Wildlife Center.

She had with her Locke, a an eastern screech owl. The center, based in Columbus, had acquired him several years after finding him with a broken wing.

She also had a tree frog, two bats and educational materials for visitors.

Other activities taking place in the Ro-Na were a reptile show by Gary Bussa, aka Dr. Des Covery,  of Kentucky, a grand ball on Saturday night and various lessons and workshops, such as such as wand dueling.

Along the streets, several booths were set up, such as the BARKer Shop Farm and Petting Zoo, who had a camel, goats, a skunk and other animals to show attendees.

Co-owner Tony Barker said it was the most visitors they had had at any stop since opening their petting zoo two years ago.

Doug Newshom, of Russell, Kentucky, was manning a booth for his company, Kentucky Blue Glass,

Taking glass rods, he melted them in the flame to make icicles. He had several more complex animal pieces for sale, which he said he makes at home with a kiln by combining smaller pieces. He said it was his first visit to the festival and that he had recently gotten back into the glass craft.

Allison Franz, an employee of Treasures of the Valley, was offering different samples of things, such as duck butter and jars of green tomato pepper butter.

“It’s homemade from a family in North Carolina,” she said of the products, which are also on sale at the shop on Vernon Street. “And we have T-shirts and homemade Harry Potter ornaments.”

One of the most popular draws was inside the city center, where the Ohio-Kentucky-Indiana LEGO User Group had a large display set up.

Sean Lehmkuhl, with the group, said they are based out of the Florence, Kentucky area and have about 50 members. They are comprised of adults and also have a junior division for children and teens.

One table featured a Quidditch pitch, a build several feet long, depicting an arena holding more than 9,00 mini figures and circled by the Hogwart’s Express train.

“This was a collaborative build of seven to eight members,” Lehmkuhl said, adding that all but three of the figures were standard Harry Potter figures.

“There are some Easter eggs,” he said. “The Wicked With of the West is in there.”

Adjacent to that display was a massive build called Brickmore, based on the Biltmore Estate in North Carolina.

The work, by Mike Stevens, took more than six months to build and has to be assembled in sections after it is transported. The lit piece is built to scale with the mini-figures and Lehmkuhl said photos and architectural plans were used to design it.

Bear said he heard from presenters like the LEGO group that they had been impressed with the fans they had met.
“They said the attendees here had paid the most attention to details,” he said. “The people here appreciate things like that.”

Bear said the festival had been a success and that he is planning on bringing it back for a third year in 2020.