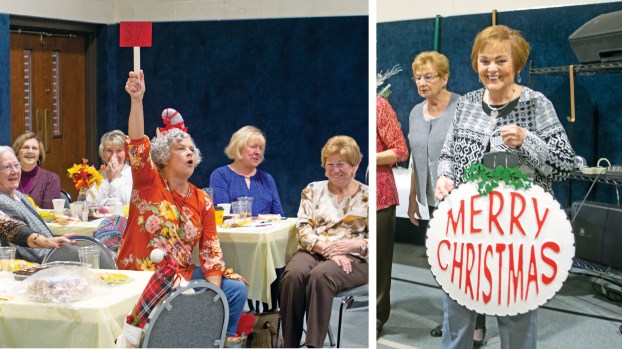 On Thursday afternoon, 120 members and guests of the Ironton Welfare Club gathered, as they do every November, in the gymnasium of the Ironton First Church of the Nazarene for their annual talent auction.

Club members bring in goods, generally with a fall or Christmas theme, for people to bid on after they had a light lunch.

The bidding was fast at times. A pair of large pillows, one with a lighthouse and one with a pair of Christmas elves, started off at $10. Within a couple of minutes, the price bounced up five dollars, then 10 dollars until the price hit $125.

Among the items were a print of the old Ironton High School before it was torn down, numerous Santa Claus figures and many homemade items, including jellies and jams, breads and crocheted blankets.

“Seems like we have a lot more things to auction off this year,” she said. “And people are being very generous. And it is just a lot of fun.”

The talent auction is one of the club’s biggest fundraisers of the year and goes to support the Ironton Welfare Club’s mission of helping the children of Lawrence County.

“We have several projects that we give money to, like Sue’s Kids, Harvest for the Hungry, Backpack Buddies, Harvest for the Hungry, Christmas with Dignity, Tools For Schools, the Lawrence County Domestic Violence shelter and the City Mission.And we do the sixth grade Eddy Awards, the Freshman Awards and the Sophmore Awards. We try to give where it is needed,” Null said. “And we give an Ohio University Southern scholarship to a non-traditional student and we give two welding scholarships out at Collins Career Technical Center. And this year, we were able to award one of the welding scholarships to a young lady, which is just great.”

This is the 101st year of the Ironton Welfare Club. It began in 1919 and times were tough in Ironton and the group had a mission to make sure the children in town had milk on a regular basis.

Supporters of Lawrence County Developmental Disabilities collected 3,098 signatures over the weekend to put a funding levy on the March... read more