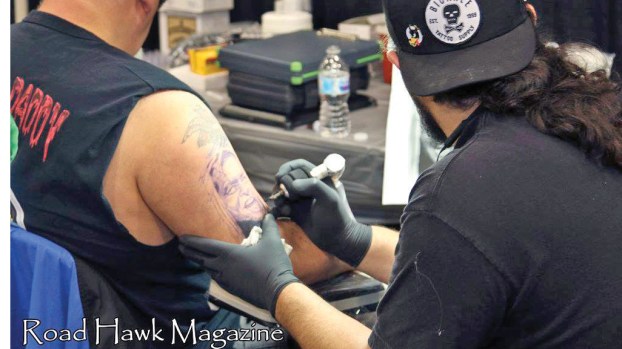 Artists work during the Tri-State Power and Ink show at the Big Sandy Superstore Arena in Huntington in 2017. Road Hawk Magazine, a publication from Chillicothe who organized the tattoo side of that event, will be hosting a two-day tattoo show at the Ro-Na Theater in Ironton this weekend. (Photo courtesy of Road Hawk Magazine)

The Ro-Na Theater will act as a showcase this weekend for tattoo artists from around the region.

Wendy Dunlap, assistant editor for the biker magazine, a print and online publication out of Chillicothe, founded in 2013, said they handled the tattoo portion of the Tri-State Power and Ink show at the Big Sandy Superstore Arena in Huntington in 2017 and that they were interested in doing another event.

“The artists were happy to have the opportunity to have something in the area,” she said, noting that they drew artists from Ohio, Kentucky, West Virginia and Indiana. “They were excited to do it again.”

She said they looked around at hotels for a venue, but then, after speaking with the Friends of Ironton, had the idea to rent the Ro-Na Theater.

“That was even better for us,” Dunlap said. “And we get to help them with their restoration project for the theater.”

She said it will be unique to have such an event in the region.

“Columbus has a huge one, but, in the Tri-State, there’s not much happening,” Dunlap said. “There are not a lot of venues, but there are a lot of good artists.”

She said they sent out invitations to artists whose skills they’ve become familiar with.

“And they will compete for trophies, which we have designed ourselves,” she said, pointing out that one of the trophies is created by Duane Spears, a tattoo artist from Elizabethtown, Kentucky, who also is a sculptor.

She said one of the awards will be the Artist of the Show award, which will be voted on by the other artists taking part in the event.

“It’s really special,” she said. “It’s a peer award, based on who they think deserves it.”

She said they will be auctioning a one-of-a-kind, custom shirt at the event, with proceeds going to Friends of Ironton.

Also on the schedule is a performance from Cosmadolls, a burlesque and performance art troupe from Ashland, Kentucky, set for 5 p.m. Saturday.

Dunlap said the weekend’s events will have one focus.

“To show the top talent we have in our area,” she said.

Admission to the show will be $5 per person and the event is for age 18 and older only.

Chesapeake mayoral race remains tied The Lawrence County Board of Elections will conduct their official canvass of all races Saturday... read more