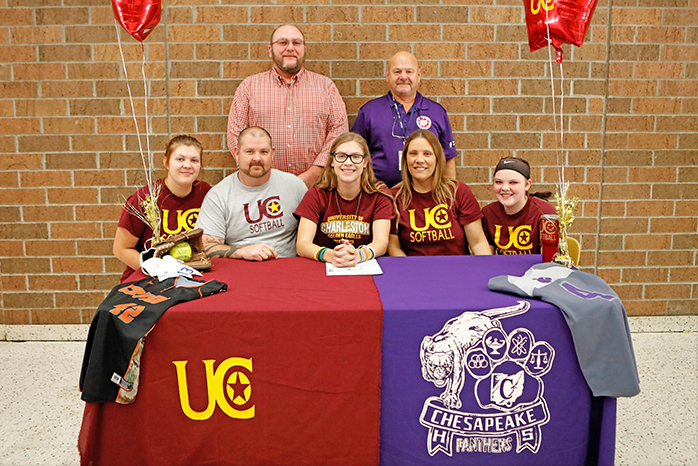 CHESAPEAKE — There are nine positions on a softball field. Ask Ashley Tackett which one is her favorite and it’s an easy choice.
“Anywhere,” said the Chesapeake Lady Panthers softball standout.
And anywhere is just the position – or rather positions — that she not only plays for the Lady Panthers but for the University of Charleston Golden Eagles after signing a letter-of-intent on Friday.
Tackett actually prefers second base and the outfield which is where UC plans to use her.
“I think I have a pretty good chance helping them in the outfield. I will help them with speed. I add speed to the team,” said Tackett.
Chesapeake head coach Aaron Rice said Tackett will be a perfect fit for the Golden Eagles and she will be an exemplary student/athlete.
“She runs extremely well and works hard. She’ll do whatever they ask her to do. She’s a team player. Wherever I’ve needed her, she’s been willing to go to that position,” said Rice.
“In three years, she’s had three different positions. That’s just Ashley. She just wants to play. She’ll get in the weight room. Her academics are great so she’s the kind of kid college coaches love to get.”
Tackett said she looked at a few other schools before deciding on Charleston. The two most prominent programs were Shawnee State and Wittenberg.
“I started to look at Shawnee at first, but I just realized it wasn’t right for me. I just liked the small campus at UC. I looked at Wittenberg, but it was a bigger campus as well and it was further away,” said Tackett.
“I liked the small campus and you’ll be ab le to make friends and it’s close to home. I love the coach and the girls on the team. It’s just a great program.”
Rice said Tackett filled a void in centerfield her freshman season, but went to second base as a sophomore to comprise the middle infield tandem with a veteran shortstop.
Chesapeake returns its shortstop and third baseman in her junior season, so she moved across the diamond to play third base.
Making the adjustment from one position to another doesn’t seem to bother Tackett. In fact, she relishes the challenge.
“I think it’s just working with it. In the infield, you just have to stay down and track the ball It helps playing multiple positions. It makes you a better athlete,” she said.
Another area of adjustment could be facing college pitching on a daily basis. But again, Tackett takes that in stride.
“I don’t think it’ll be much of an adjustment. In travel ball, you face some really good pitchers from all over,” said Tackett.
Softball is the main sport that Tackett prefers to play, especially since she’s played softball since she was 6-years old.
“It’s the main one. I’ve played basketball a few times, but I just wasn’t really into it, so it’s mainly been softball,” said Tackett.
Tackett plans to double major in accounting and sports analytics.