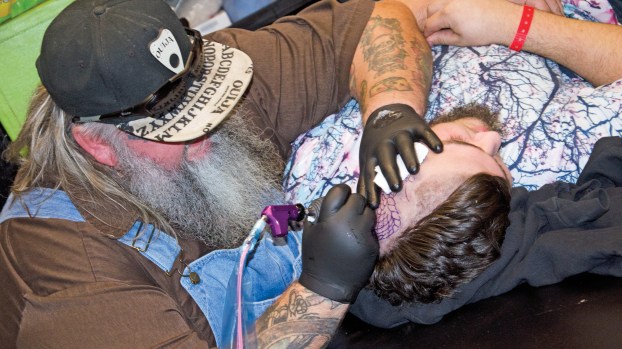 The Road Hawk Magazine Tattoo Show took place over the weekend at the Ro-Na Theater in Ironton. (The Ironton Tribune | Heath Harrison)

A steady crowd came through the Ro-Na Theater over the weekend for the Road Hawk Magazine Tattoo Show.

“It’s been really good,” Wendy Dunlap, assistant editor for the magazine, said on Saturday, the first day of the event. “We have 19-20 artists and have had more than 200 people come through shopping for tattoos.

The floor of the theater was full with shops and artists from throughout the region setting up booths.

A panel of judges evaluated not just tattoos done on site, but work completed prior to the event.

One of those judges was Sam Sowards, who has been in the business for several decades. He said, before retiring, his shop in Gallia County was the oldest in Ohio.

“We’re looking at overall design placement,” he said of the judging process. “Whether it matches the muscle group. We also look for a clean out line and shading.”

Craig Featherolf is the owner and found of Road Hawk Magazine and oversaw the event.

“We focus on the art of biker culture,” he said of his magazine, which is distributed in southern Ohio, Kentucky, West Virginia and Indiana. “From fiction, to tattoo work, to bike-related artists.”

He said the magazine had handled the tattoo side of the Tri-State Power and Ink show at the Big Sandy Superstore Arena in Huntington in 2017 and had wanted to do a regional show. He said they were happy to settle on the Ro-Na as the location.

“The Friends of Ironton have been good to our publication,” he said. “And we support those who support us.”

In addition, there was an auction of a one-of-a-kind airbrushed shirt by art Donnie Inman, with proceeds going to the Friends of Ironton’s fund to restore the Ro-Na.

The event also helped to raise money for Gary “Packrat” Akin, a friend of the magazine who is battling lung cancer.

Donations were being taken and a 50/50 drawing was organized for him, Dunlap said, adding that a gofundme account has been established to collect donations for his medical care.

Awards were given out for the best tattoos of the day, as well as overall. And a trophy was awarded for the best work selected by the other artists in a peer award.

An assistant band director has been fired after an accusation of improper conduct with students. South Point Local Schools released... read more