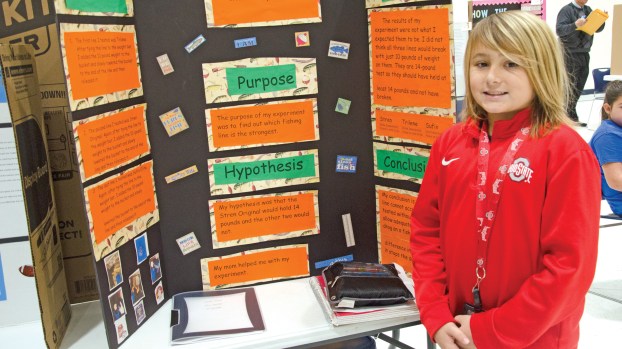 BURLINGTON — The Lawrence County Science Fair will take place on Feb. 6 at Ironton Middle School and elementary and middle schools are hosting their individual fairs to determine who qualifies for the county event.

The fair, which is open to fifth through eighth graders, is organized by the Lawrence County Educational Services Center and is open to all districts in the county.

Jeff Heinl, the school’s science teacher, said the school used to hold the fair later in the year, but moved it to earlier, in order to allow students to go to county.

“If they get a 90 percent or higher on the project, they can go to the county level,” he said.

Projects covered things such as how plastic harms the environment, which brand of popcorn pops best, how candy is made and which kind of paper towel is the strongest.

“We had 68 projects,” Heinl said. “It was mandatory and each student had to do one.”

Ryder Pratt’s project studied which brand of fishing line was the strongest.

Tying a weight to each, he test three kinds at 10 pounds and 14 pounds. He found that Sufix was strongest, stretching at the maximum weight, while the others broke immediately.

“I’m looking at which soda pop affects teeth,” she said. “Mountain Dew has 19 tablespoons of sugar and Pepsi has 10 tablespoons.”

She tested two types, Pepsi and Mountain Dew with borax over a week to see which causes decay fastest.

She said she was surprised at how quickly the sugar did the job.

Madsion Viglianco was studying how much energy it takes to power a light bulb.

She hypothesized that it would be enough to power the bulb.

“I hoped to learn how much damage they can cause and they form and spawn,” he said.

In addition to his research, he created simulated effects of the weather patterns involved by using water, food coloring and soap, one in a bowl and two with bottles that he shook up.

“I really didn’t expect it to start swirling so fast,” he said of the effect in the bottles after he shook them.

Heinl said students had to present their projects three times each to judges from the community, he said.

A parents night took place in the evening, where awards were handed out.

Osborne was the grand prize winner for the fair for her project, “Germ Wars.”

1st– Ezra Young — Under What Conditions Do Potatoes Sprout Faster?

2nd– Shaelynn Moore — How an Eggs Floats in Salt

Honorable mention — Hailey Ellis- What Happens When You Soak an Egg in Vinegar for Three Days; Olivia Watts- Slime

1st– Kasedy Black — Which Paper Towel is the Strongest?

3rd– McKayla Porter — How Plastic Is Destroying the Environment

1st– Elijah Payne — The Computer: How it Works

1st– Wyatt Frederick — Does Temperature of a Battery Effect How It Works?

2nd– Madison Viglianco — How to Light A Bulb

2nd– Adyson Copley — Where Should You Keep Your Toothbrush?       ; Bailey Sloan- Which is Cleaner, A Dog’s Mouth or Human?

HM- Karmen Stevens — How Do Sugary Drinks Affect Your Teeth?

3rd– Micah Workman — The Life Cycle of a Heartworm

Sentencing delayed: Boggs will be sentenced in January

GREENUP, Ky. — A former gym owner that has been sentenced to five years in prison in Ohio for having... read more