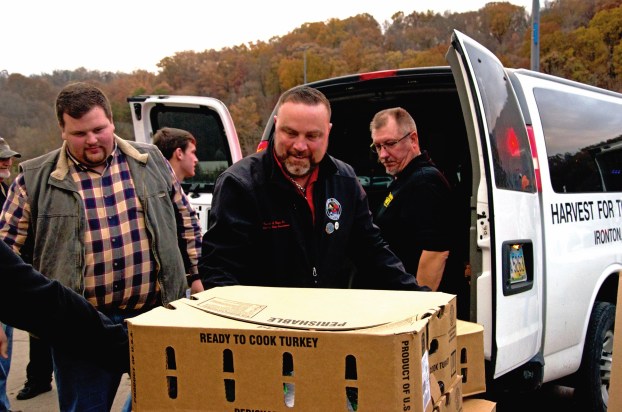 SOUTH POINT — Food pantries, churches and other organizations received a boost on Thursday in their efforts to help the needy during the holiday season.

Chris Sammons, with the group, said that, in total, 850 turkeys were given out to the organizations, such as Backpack Buddies, Harvest for the Hungry and the Chesapeake Community Mission Outreach.

The turkeys were paid for with funds raised by the group throughout the year with raffle tickets and a Gin Bash at Collins Career Technical Center.

“We raised the money for them,” Sammons said.

Sammons said the winner of that event received the prize after passing a federal background check. The chapter volunteers raised more than $8,000 through those efforts.

Sammons said they also had community and business sponsors, such as City National Bank, ElevateInsurance, Jett’s Towing, Pathways and the South Point Walmart, where the turkeys were purchased from.

Each group took turns backing a truck or van up while the volunteers wheeled the turkeys out to them and helped load the vehicles.

The donations will be put to good use, such as the CAO, who received a sizeable amount and will be using them in their annual Christmas giveaway on Dec. 19 for those who apply and meet low-income qualifications. The group provides a package of food items, enough to make a Christmas dinner, while Harvest for the Hungry, based in Ironton, will be doing a similar event for registered families for Thanksgiving.

The donation is part of the Turkey Hunter’s Care Program for the Longbeards, part of the NWTF, a nonprofit 501(c)3 conservation organization. It is their second year taking part. Last year, the group donated 375 frozen turkeys to local churches and food banks last year.

The groups said they are looking for more business partners for the program for its next year.

This weekend, the annual Ironton aLive Small Business Saturday and Christmas festivities will be a little different. Besides the annual... read more