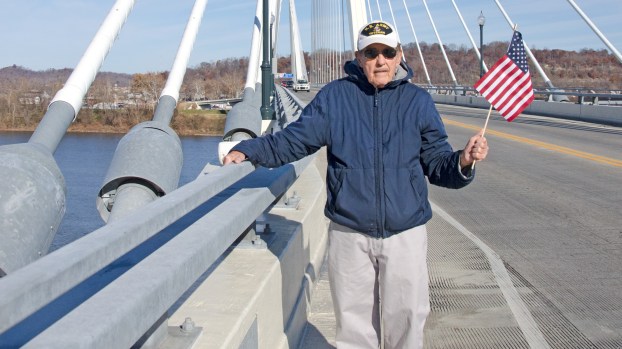 Each year, in the week before Thanksgiving, Bill Neville takes his flag and goes for a walk across the Oakley C. Collins Memorial Bridge in Ironton.

Neville, 92, of South Point, times his walk to the anniversary of the bridge’s opening in 2016.

It was that year that he walked both the new span and that of the old Ironton-Russell Bridge, which closed that week after 94 years of services.

The old bridge had a particular significance to Neville’s family, who are from Deering.

He said his mother, Birdie Nell, and grandmother, Lucinda Blankenship, carried his brother, Fred, across it in her arms as an infant shortly after it opened.

Fred, a World War II veteran who served in Italy, was in poor health when the new bridge opened and could not attend, so Neville walked both bridges.

“One for me and one for my brother,” he told The Ironton Tribune at the time.

Fred died a few months later, on April 2, 2017 at the age of 94, the same age as the bridge that was demolished that spring.

Bill, who is also a World War II veteran, having served in Japan, is retired as an industrial engineer from AK Steel/Armco after 40 years. He has been a member of Community Missionary Baptist Church in Deering since 1937 and had five children with his wife of 62 years, Ginny Neville, who died in 2015.

He said he carries the flag each year for a simple reason.

“I do it for my brother and my family,” he said. And I do it for all veterans and for those who worked on the bridge. It’s to keep the memory alive.”