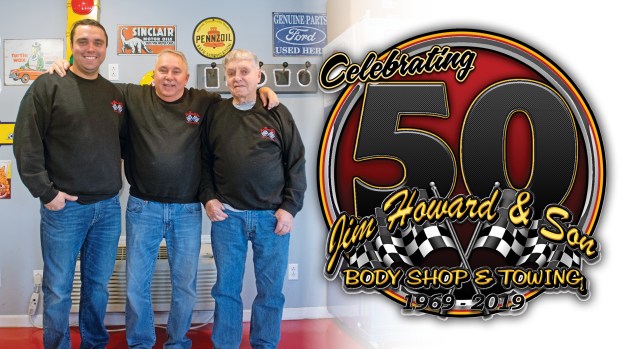 The three generations of Howards, Nich, Jimmer and Jim, stand in the office of Jim Howard and Son Body Shop and Towing. The business was started by Jim Howard in the late 1960s and has been at their location on State Route 93 outside of Ironton since 1969. (The Ironton Tribune | Mark Shaffer)

One customer at a time: Jim Howard and Son has been in business for five decades

For a half century, Jim Howard and Son Body Shop and Towing has been at the same place, it just grew as business expanded.

Jim Howard started doing car repair upon his return to Ironton after getting out of the military.

“There wasn’t really a lot going on, he drove a truck for a while and then started working on cars,” explained his son, Jimmer. He had a couple of different shops, until he bought land on State Route 93 in 1969.

“When my dad moved out here, all there was here was one big building,” Jimmer said. “There was nothing. The building didn’t have a bathroom, it didn’t have an office. So, he built a building for an office two or three years later.”

Soon, the little office wasn’t big enough, if Jim and Jimmer were in the office, then there wasn’t room enough for a customer to come in and get an estimate. So they built a bigger office and a building big enough to hold three cars.

“So we were constantly expanding to keep up,” Jimmer said.

Jimmer joined the shop before he graduated Rock Hill High School in 1976, and a third generation, Nich, joined after graduating high school as well.

“They just loaf here,” joked Jim as he monitored calls from customers and insurance companies.

The shop does body repair, including painting and a sign posted in their office boasts that they have 23 and ½ hour towing service, although they really are available 24 hours a day.

“Yeah, that’s an eye catcher,” Jimmer said. “You wouldn’t believe how many people ask about that. They ask about the other half hour and I tell them that if they ever call and we’re not there, that’s the half hour we’re gone.”

The shop started off small, just an office and a car repair bay. Over the years, it grew and grew. It now boasts an office, a repair shop and a painting building. Besides Jimmer and Nich, there are four employees and Jimmer’s wife, Dee Ann, does the books.

Fifty years is a rare anniversary for a small business.

“He taught me years ago, take care of your customers, no matter what it is,” Jimmer said. “Because it is such a small area, we depend on repeat business. If you talk to anybody who has been here, they almost always come back.”

He said he talked to a lady the other day and told her if she had any problems, just to bring it back and they would take care of it. She said she knew and wouldn’t take her car anywhere else.

“That’s what you want to hear,” Jimmer said.

Nich said a reputation is a big thing for a small business like theirs.

“If you don’t have a good reputation, you don’t get customers. Simple as that,” he said.

“People that I fixed cars for 20 years ago have kids that are bringing their cars in now,” Jimmer said. “Mainly because they wreck their car and they say ‘Dad, what should I do?’ Dad says ‘Take it to Jimmer,’” Jimmer said.

“We hear that all the time,” Nich said.

One thing that has effected the business over the years has been the advance of technology used in vehicles. Cars and trucks used to be just basic engines and simple wiring. But, over the years, vehicles came equipped with more and more sensors to control systems.

“There are some things that no body shop can do anymore,” Jimmer said. He pointed out that, after an accident, they can replace airbags and all the systems that are connected to it, but the car has to be taken to a dealership to have a certain code entered in so the system will work right.

“That’s one of the things we deal with, we hate to see blown airbags,” Jimmer said, with a laugh. “We do put everything in, but we have to take it and have it programmed.”

On the plus side is that computers have made estimates much easier. They used to have to use books to figure out everything from parts costs to work hours to paint costs to do the estimate.

“Now, everything is done for you,” Jimmer said. “Everything has changed so much.”

Jimmer said the business, like most longtime business has “been a good living but a hard living. It is not an easy job.”

The day before Thanksgiving, the Howards were fielding calls and trying to get cars out the door before the long weekend off.

“Most any business, it is feast or famine,” Jimmer said. “We will roll on. Like right now, we are so busy, we can’t get stuff out fast enough for the people or the insurance company. But then there will be times you wonder where the next job is coming from. Then two weeks later, you have so much work, you don’t know how it is going to get done.”

Nich said that it comes back to always trying to take care of customers.

Local schools, community groups and others received donations this week in advance of the holiday season. The Loyal Order of... read more