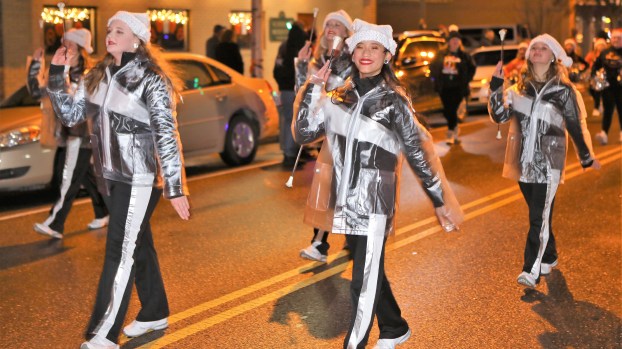 Despite frigid temperatures and wet conditions that reduced its size, the Ironton Parade went on as planned on Monday night.

The cold snow and drizzle mix slowed down as marching bands, floats, cars and trucks lined up before the parade started at 6 p.m.

But no matter the weather, the parade goes on.

“Rain, snow or shine,” said organizer Lou Pyles, of the Ironton Lions Club. “Or whatever this is coming down, snizzle?”

Pyles said that the parade wasn’t as big as normal because of the cold.

“We had about 50 or 60 that were going to be in the parade, but a lot of people pulled out because it is cold and raining,” she said. “And I can understand that. It’s not great weather to be on a float, but we are thankful for the people that did show up to open up the holiday season.”

A crew from the Southern Ohio Amateur Radio Association and the Lawrence County Amateur Radio Emergence Service were on hand to help coordinate the parade and facilitate communication.

They were told to bundle up because of the cold, which they reported as 37 degrees.

SOARA president James Rowe thanked the members for coming out under adverse conditions.

“It is a great opportunity to showcase our skills to the public and to test our radio equipment, as well as our turnout gear,” he said.

And the crowd wasn’t as big as normal, although a couple hundred people were scattered along the downtown parade route, although many watched from their cars.

There was one new addition to the parade this year, Dasher, a six-month old reindeer from the BARKer Farm. He had made his first public appearance on Sunday at the Christmas tree lighting ceremony in Jackson.

Despite his age, Dasher didn’t seem bothered by the crowd or the music coming from the band.

“It’s been no problem at all,” Barker said. “They trained him well at the North Pole.”

Dasher’s next appearance will be in South Point on Saturday for the People for the Point breakfast.

And, as always, the big draw of the parade was the appearance of Santa Claus.

One of his biggest fans was four-year-old Lily Frazier who stood there with awe as Santa passed by her.

“It’s her first parade,” said Rebecca Frazier. “She loved it.

“He’s funny,” Lily Frazier said of Santa as she showed off a candy cane that had been handed out during the parade.

A woman accused of murdering her ex has turned down a plea offer and her case will go to trial... read more