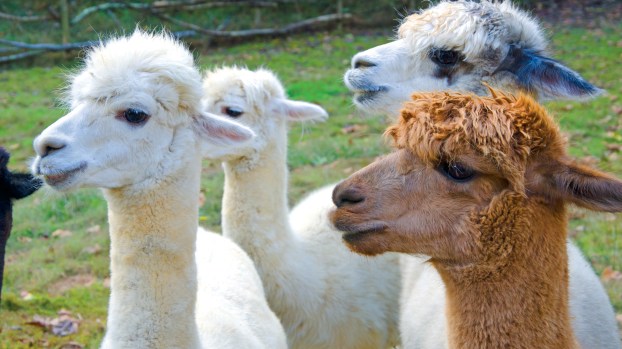 For those driving along the winding stretch, the sight of a herd of alpacas, a camelid native to the Andes, might be unexpected, but for Kevin and Chris Toney, the two brothers who operate Silver Run Ranch, the animals are key to their business, where they craft fleece and woven creations. (Photography by Heath Harrison)

For those driving along the winding stretch, the sight of a herd of alpacas, a camelid native to the Andes, might be unexpected, but for Kevin and Chris Toney, the two brothers who operate Silver Run Ranch, the animals are key to their business, where they craft fleece and woven creations.

Kevin said the ranch dates back to 2012, when he started on its north field.

“And by March, we were ready to bring in the first six alpacas,” he said. “Thereafter, we worked on the big barn and we expanded the herd.”

Over the years, he said the herd has ranged from 10-12 of the animals and he hopes to bring in a few more as they expand more.

Kevin, who is retired from the Army National Guard, is originally from northern Ohio.

“I came here by way of Virginia,” he said of getting to his Kentucky home.

Their 15-acre ranch is bordered by a rail fence, cut from natural timber on the grounds, which Kevin says has drawn many compliments from visitors.

“They say they feel like they’re driving back in time,” he said.

“With the exception of this summer’s drought,” he said.

And the alpaca’s manure, which they leave in communal piles, is put to use.

“It’s very easy to gather,” he said. “It composts quickly and we reuse that for fertilizer.”

He said the animals, which he describes as a bit shy, are easy to maintain.

“We make sure there’s plenty of water, and they like a hose bath,” he said. “It’s like watching a kid go for an ice cream truck. It’s fun to see.”

He said the animals’ needs are “pretty basic” and he gives them some nutrition supplements and alfalfa pellets in dry weather.

Once a year, they are inoculated for parasites and they get a tetanus shot every three years.

They’re at home on the hilly terrain of the grounds, which is much like their natural habitat.

“And you feel their rhythm in the morning, as they head to the high ground,” he said.

Kevin said they are comfortable with the cold and he often sees them sleeping outside the barn.

“Except in the extreme temperatures below zero,” he said.

He said the herd is comprised of all males, who are gelded, and range in age from mature juveniles to the oldest, Magic, who is 17.

The average lifespan of alpaca is about 20 years, he said.

They also coexist fine with the native animals, he said, noting they don’t react much to deer on the property.

“And we have some coyotes around here, but we’ve had no issues,” he said, noting the animals’ size as a possible deterrent. “But I’ve been thinking about getting a guard donkey.”

After the animals are sheared, Kevin said the fleece is sent to the mill to be spun into yarn.

From there, he and his brother take the yarn and, on a wooden loom, begin to weave their products using a process called continuous strand frame weaving.

“It’s an old lost style with no shuttle,” he said of the process. “It traces back to the Appalachian peasants’ weave brought over from the British Isles and Scotland. It died out with colonial times and shuttle looms.”

He said he made his first scarf in 2014 and taught Chris the process.

“It’s not a quick process,” he said. “It’s truly by hand, akin to Navajo weaving.”

They also use natural dyes for coloring.

He said one thing they are producing is a wedding blanket, based on a tradition in which the first blanket for a newly-married couple would be a collaboration between the two families, with each producing a small blanket that was joined down the center.

Kevin said they are also purchasing fleece from other herds to make the products, which they sell mostly at art shows and festivals. He said they also take commissions for pieces, at no extra cost.

They now have an outlet for their work in Ironton, at The Vault Market, owned by Abby Keuhne and Amanda Cleary, at 211 Center Street.

Kevin said they try to incorporate their herd into anything they produce, including a small packet with each item.

“It will have a write up and pictures of the herd,” he said. “It makes it more personal.”

He said they also open up their ranch and studio to visitors and are planning an open house around Christmas.

“People are welcome to visit and see what we have,” he said.

He said their items offer a “personal story.”

“It’s something that’s made here and is set apart from what you would find in a department store,” Kevin said. “And I tell people, if you keep them away from sharp objects and hot water, they’re something that can be passed down through generations.”

For more information on Silver Run Ranch, visit their Facebook page and www.silverrunranch.com.

Artist takes time to produce treasured items Larry Weese Jr. said he got into wood art as a hobby. “I... read more