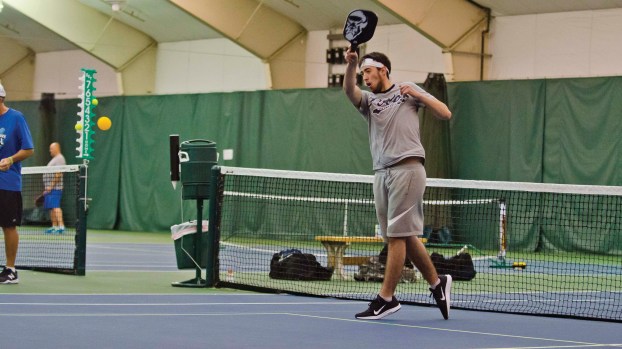 Helping others see what the club members enjoy in the game is an unspoken credo of the group. So far, the club has gone out to Cannonsburg Elementary to give free lessons to the children and has offered free lessons at Ashland’s Central Park at the newly marked off pickleball courts. (Photography by J.Bird Cremeans)

ASHLAND — The yellow pickleballs slap down on the glazed wooden floor of the basketball courts of the Ashland YMCA.

Suddenly the gym sounds like a convention of tap dancers trying out a new step.

For 60 years, this school teacher was a diehard tennis player. Then one day she had to keep a promise to herself.

“I said if I ever broke a bone, I’d quit tennis,” Shields said.

Two years ago, that’s what she did, taking a dive to return a serve. So, she traded in her racket for a paddle and hasn’t regretted that move.

“There are a lot of nice players here,” Shields said. “It’s a good group. They take me in stride.”

“This is my exercise,” she said. “This is more fun than walking on a treadmill. It’s pretty much the same stroke as tennis. It’s the same forehand. The same backhand.”

Watching Shields play is why those not in the know call pickleball the geriatrics tennis. But Ashland Pickleball Club president Lynn White knows better.

“It’s an activity for all ages,” White said.

In fact, the ages of the Ashland club’s members start at 17 years and go up to 81. And all ages in-between.

“It is geared for most senior communities,” White said. “It’s not as demanding as tennis. Some people saw how it was. They played tennis and this they could play at any age.”

Pickleball was created from a variation of an old saw. Boredom is the mother of invention.

Doing the inventing in the late 1960s was one-time Washington State representative and lieutenant governor, Joel Pritchard. He and some buddies had come back to his house after a round of golf.

What they found were three families — theirs — going crazy from boredom. A game of badminton was proposed, but no one could find a shuttlecock. So, a pickleball was substituted, tennis nets lowered and paddles made out of plywood. They had invented pickleball.

That history is thanks to Wikipedia, which also gives two explanations for the game’s name.

One is that pickleball was named for the Pritchards’ family dog, “Pickles. Another is that Pritchard’s wife coined the name. The third is that a bad stroke could land the player “in a pickle” — to use the British phrase for being in a bad way.

Whatever the story, it appears to matter little to the players — at least not to those who show up weekday mornings at the Ashland Y.

“I joined the Y and saw the joy these people got playing,” he said. “There’s not a lot of stress in the body with this. You can participate at any age. This is more a game of finesse and eye-hand coordination.”

Like any sport, a little practice is the key to learning and improving.

“The first year it’s harder to play,” White said. “Everyone gets better. There’s a lot of thinking in this game.”

Mike Pence knows that; he’s been playing for three years.

“I used to come in here and run,” he said. “Some guys kept hounding me. You’ve got to come and play. And I got to like it. It takes agility, endurance and technique.

“You can put a spin on the ball. The pros will do soft shots. They can place the ball where they want to. Strategy is the first requirement. Patience is a tool.”

Michael Nelekona got to liking it so much he drives down from Louisa, Kentucky, twice a week.

“There’s a little learning curve,” he said. “But if you play racketball or tennis, you can adjust quickly.”

Helping others see what the club members enjoy in the game is an unspoken credo of the group. So far, the club has gone out to Cannonsburg Elementary to give free lessons to the children and has offered free lessons at Ashland’s Central Park at the newly marked off pickleball courts.

And besides a new skill to add to one’s sports resume, players get an extended family.

“We’ll play for three hours,” White said. “It’s a sport where everybody gets along. And we have just as much fun afterwards. That’s when we go out and eat.”

As local as it gets