Ironton heads for final stop on quest for state title 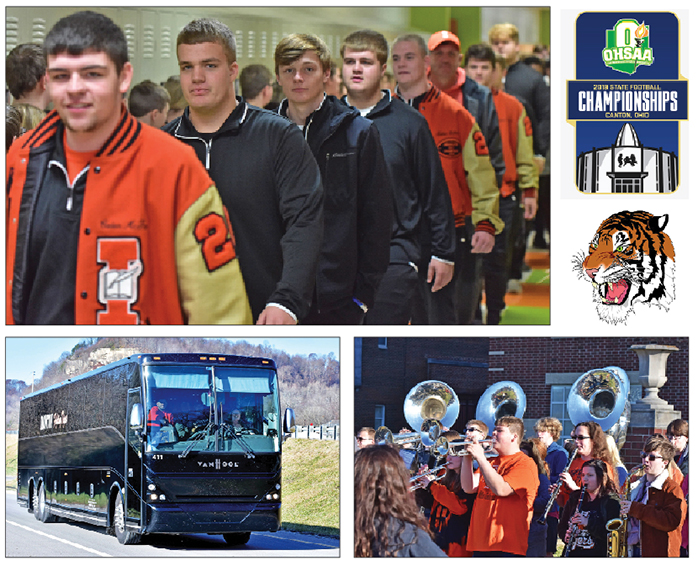 TOP LEFT: Members of the Ironton Fighting Tigers football team walk through the halls at the Ironton Middle and Elementary schools before heading to Canton for the Division 5 state championship game. LOWER LEFT: One of the chartered buses carrying team members heads up the ramp onto Route 52 as Ironton begins its road trip; LOWER RIGHT: Members of the Ironton Million Dollar Marching Band play the school fight song “Men of Ironton” as the school conducts a pep rally sendoff. Ironton plays Kirtland at 8 p.m. on Saturday at Canton’s Hall of Fame Stadium as the Fighting Tigers seek a third state football title.(Kent Sanborn/Southern Ohio Sports Photos)

Next stop, Canton, Ohio, and the Hall of Fame Stadium.
The Ironton Fighting Tigers boarded their chartered buses on Thursday morning following a pep rally that was used as a send-off as the team began to travel to Canton for its meeting at 8 p.m. on Saturday against the Kirtland Hornets for the Division 5 state football championship.
Up until Thursday, Ironton coach Trevon Pendleton said it was business as usual as Ironton prepared for the program’s first state championship game since 1999.
“You truly don’t want to treat anything different than from the previous week. Everything is going to stay status quo,” said Pendleton.
“As far as everything goes here, it’s was a typical week for us. Our kids understand it’s another game, it’s another week. Every game counts one, it just happens to be the last one.”
The typical week ended on Thursday morning with the pep rally and then players, coaches and team personnel boarded the buses and made a quick stop over at the Ironton Middle and Elementary schools where the future Fighting Tigers cheered their team and gave them a send-off as they seek the school’s third state championship to go with the ones they won in 1979 and 1989.
Pendleton said the game is special for the players and not just because it is for the state title.
“Our kids understand it’s another opportunity to play with their brother. Our seniors understand it’s the last time they’ll be able to put on the Ironton Fighting Tiger uniform. That’s what’s special,” said Pendleton.
“Any time you’re playing and your last game is the state championship, and you’ve got a quality opponent like Kirtland, they understand what’s at stake. They understand the community is behind them. They understand the support and they understand it’s an opportunity to showcase what they’ve been working toward all year and what they’ve earned.”
Ironton enters the game 13-1 and ranked No. 5 in the final Associated Press Division 5 poll. Kirtland is 14-0 and finished ranked No. 1. The Hornets won the Division 6 state title last season and are in a state championship game for the eighth time in the past nine seasons.
The Fighting Tigers have played state championship games at nearby Massillon Tigers Stadium but this is the first trip to a title game in Canton.