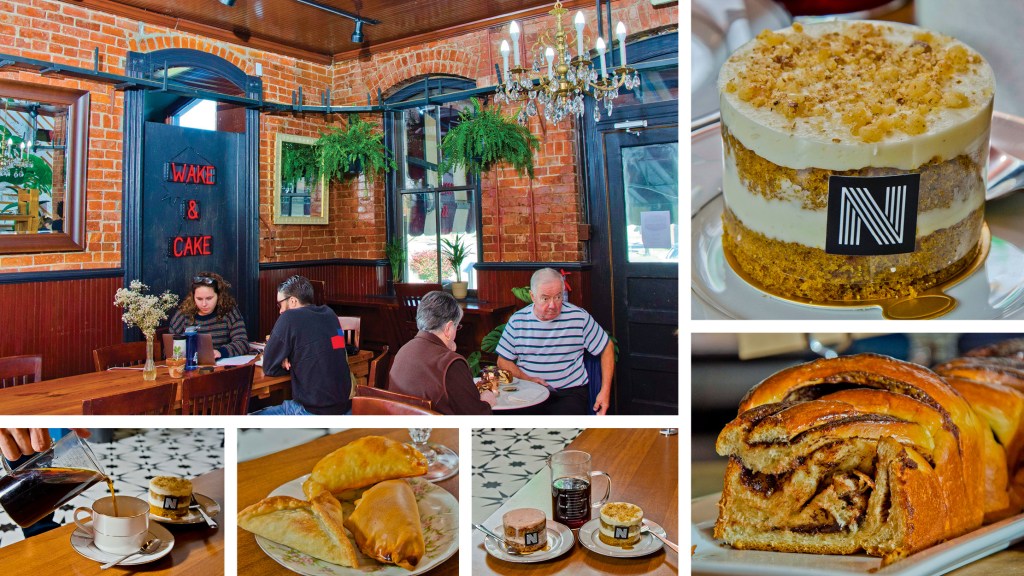 This summer, Schulenberg and Barcenas opened up Nomada Bakery Café & Eatery in Heritage Square in downtown Huntington. They share space with the Convention and Business Bureau. (Photography by J.Bird Cremeans)

Nomada Bakery Café & Eatery got its start in a failure.

Shawn Schulenberg and Ariel Barcenas got a Kitchen-Aid mixer and Barcenas decided to use it to make a dessert.

It did not turn out well. But that didn’t deter Barcenas.

“I remember taking chemistry classes in school, so I knew baking requires proper ingredients and patience to create good food,” he said.

He continued to work on the recipes that he remembered from growing up and from his travels.

The pair had weekly brunches for friends and Barcenas used that as a reason to work on the recipes and perfect them over the year. He was working in the food industry and, as his skills improved, he found there was a demand for his baked goods and his food with international and traditional flair.

So, this summer, Schulenberg and Barcenas opened up Nomada Bakery Café & Eatery in Heritage Square in downtown Huntington. They share space with the Convention and Business Bureau.

“Ariel is front and center here since he is the baker,” said Schulenberg, who also works at Marshall University as a chair in the political science department. “I can’t bake a thing so I’m more of the business manager. He is the vision behind everything that is going on here.”

Nomada offers a wide variety of items, things like bread pudding, rice pudding, popovers, mini-cakes and other desserts, as well as salads, their signature empanadas and coffee, fresh juices and tea. Barcenas also creates a rotating menu of food.

The name, Nomada, is Spanish for nomad.

“Neither of us are from here,” Schulenberg said. He is originally from Minnesota and Barcenas is from Panama. They met in Argentina in 2007 and eventually married. They lived in a number of places before settling down in Huntington. “So, we thought the name fit the concept and our lives.”

They decided to open the bakery and café and the recipes reflect their lives.

“It has a bit of international flair with a Latin American influence,” Schulenberg said. “So, we are serving empanadas, which is South American, and then dishes that are more Central American. A lot of the concept is modern/things that remind you of your grandmother’s cooking.”

Schulenberg said that Barcenas is now an artist when it comes to baking and cooking.

“He is an artist first who has channeled his energies into a lot of different areas,” Schulenberg said. “He really focuses on the last 10 percent of detail that really makes flavor pop and the food is aesthetically beautiful. We don’t want anything that comes out that doesn’t meet our standards.”

The pair still continue to have their weekly brunches with friends, although no one brings much to the table.

“I make everything now,” Barcenas said. “They just have to bring the wine.”