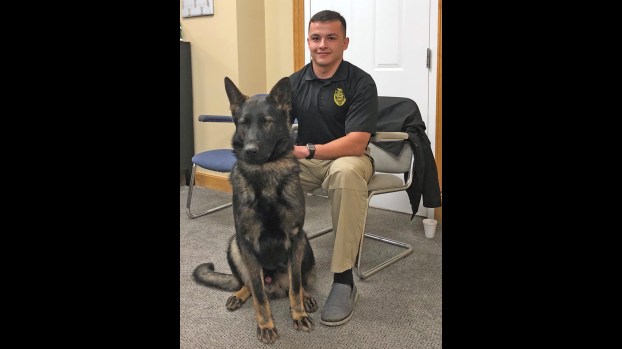 Ammo, the new K-9 for the South Point Police Department, was certified on Monday and is ready to go into service for the village. His handler is Jordan Reyes. (Submitted photo)

Ammo, a German shepherd, received the certification on Monday and will be used in drug operations for the police department.

The dog, whose handler is Jordan Reyes, will be used to sniff vehicles suspected of harboring drugs.

Gaskin said the dog is certified for marijuana, methamphetamines, heroin and cocaine.

The dog was introduced to the South Point council at their meeting on Tuesday.

Also at the meeting, Gaskin said the council received the report from the committee appointed to study the issue of vicious dogs.

The council voted earlier this year to repeal its vicious dog ordinance, as it had come into conflict with Ohio revised code.

Gaskin said the council will review the committee’s proposal and give their input at January’s meeting.

“And keep in mind, we are still operating under a vicious dog ordinance under the Ohio revised code,” Gaskin said. “So, we are not without protection for now.”

Tuesday’s meeting also served as the village’s Christmas party and Gaskin said the council received new chairs to replace the old ones, which had been in use for several years.

“Those were purchased at a Black Friday sale,” he said.

The Ironton Council for the Arts will present its annual Christmas concert at 3 p.m. Saturday in the Ironton High... read more