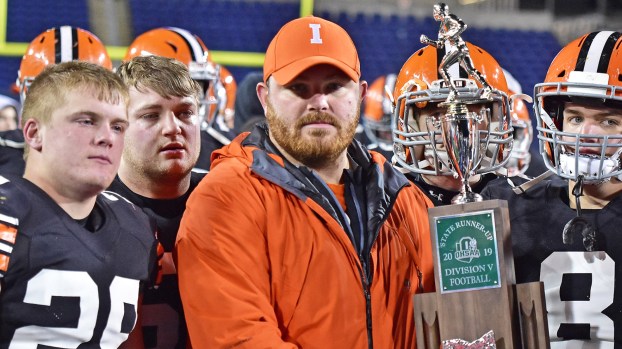 CANTON — It was the final game of the 2019 season, but it wasn’t the way the Ironton Fighting Tigers wanted it to end.

In a hard-hitting game on Saturday night at Tom Benson’s Hall of Fame Stadium, the Kirtland Hornets were able to survive the slugfest with a 17-7 win over Ironton to capture the Division 5 state championship.

Although it was a disappointing end, head coach Trevon Pendleton said the players — especially the seniors — still had success beyond the wins and losses as Ironton posted a 13-2 record winning the Ohio Valley Conference title and the Region 19 championship.

“I’m just so proud of them. This senior class doesn’t realize it. They’ve changed the course of Ironton Fighting Tiger football forever in a positive way. They brought it back to where it needs to be and it’s going to continue to be here because of the leadership and character that they’ve instilled in the younger guys,” said Pendleton.

The state championship was the second straight for Kirtland who won the Division 6 title last season. It was the fifth overall for the program, all under coach Tiger LaVerde.

Ironton finished with 253 total yards with quarterback Gage Salyers hitting 7-of-18 passes for 205 yards including a 77-yard pass play to Jordan Grizzle for their only touchdown. The play was the longest scoring pass in Division 5 championship game history.

The Fighting Tigers’ running game was limited to 48 yards on 28 attempts. Reid Carrico had 40 yards on 12 carries.

Kirtland ran 46 times for 123 yards as Mason Sullivan rushed 23 times for 101 yards and a 27-yard touchdown jaunt for the game’s first score. Quarterback Liam Powers was 4-of-5 for 114 yards and a TD with Gage Sullivan making three outstanding catches for 85 yards and a TD.