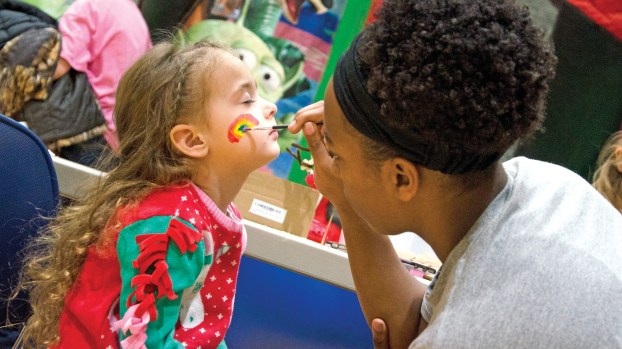 Sadie Spears, 3, gets her face painted at People for the Point’s Christmas Extravaganza at South Point High School on Saturday. (The Tribune | Heath Harrison)

SOUTH POINT — It was the second big Christmas event in the village of South Point in the last few weeks, but there was no sign the holiday spirit was diminishing.

People for the Point hosted their annual Breakfast with Santa and Christmas Extravaganza at the high school on Saturday, drawing a strong turnout.

“We served at least 450 this morning,” Chris Smith, a village council member and the group’s president, said.

After the breakfast and photos with Santa wrapped up, the crowd was still strong, as of noon, with children playing on inflatables, getting their faces painted and taking part in the afternoon activities. A showing of the Rankin-Bass Christmas special, “Rudolph the Red-Nosed Reindeer” was set for later in the day.

The event came shortly after the Lawrence County Chamber of Commerce’s Festival of Trees and Christmas Market, which also drew a large turnout a few weeks ago.

Throughout the high school’s gym on Saturday, vendors set up booths, selling a variety of items, with a heavy emphasis on holiday-themed crafts.

One unique booth was positioned near the entrance, featured Hannah Boggs, a local teen author from South Point.

She was selling paperback and hardbound copies of her self-published book, “Violent Delights.”

“She wrote her first book at 16 and she just turned 18,” her mother, Jeanette Boggs, said.

Boggs, a senior at Ohio Connections Academy, an online school, said she just finished her second work, is in the process of editing it and hopes to release it soon.

“It’s a young adult thriller, a supernatural thriller,” she said of her current book, which has a teen protagonist. “She has a heart condition and she meets two magicians who are twins and they transform her world.”

All funds raised from Saturday’s event go into People for the Point’s other activities, which include their annual Fourth of July celebration, featuring music, fireworks and other entertainment over the Independence Day weekend.

On Tuesday, people going through the Lawrence County Courthouse had a chance to see the future. Or at least a... read more