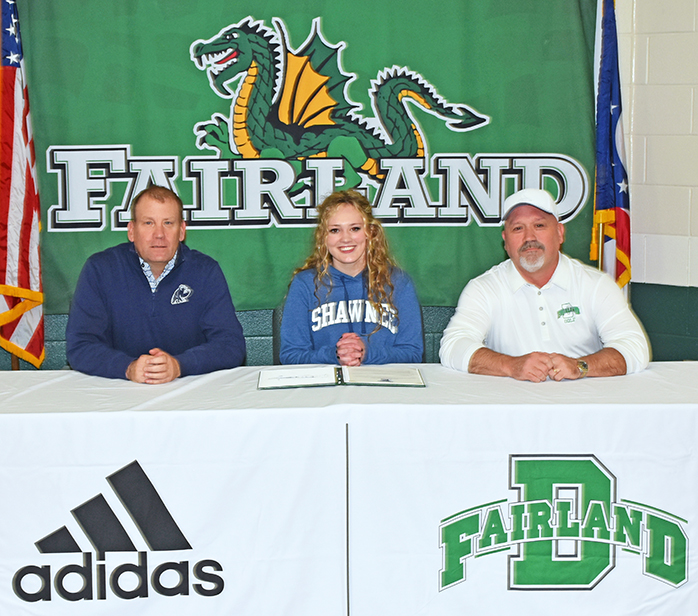 PROCTORVILLE — It took some breaks to help Addi Speed get her big break.
Although her father Nathan Speed is the Fairland boys’ head basketball coach, Addi said basketball hasn’t been at the forefront of her favorite sports since middle school.
She tried playing basketball but one of the reasons she turned to golf was because of basketball injuries.
“I played basketball when I was younger, but then I broke both of my feet and they just kept breaking,” said Speed. “I broke my right one three times and my left one twice all playing basketball, so I thought that this wasn’t my thing.”
After putting her sneakers away, Addi Speed picked up her golf clubs and started to work on a different sport and that work led to her signing a letter-of-intent to play for the Shawnee State Bears.
Speed started playing golf in the seventh grade at the urging of her grandfather and a former golf coach Dave Houck whom she affectionately calls “Boo.”
“He coached back in the 80s and he said ‘let’s give it a try.’ So, I did and I just fell in love with it,” said Speed.
Although she played volleyball as well in the past, Speed only golfed during the fall this year to focus on her game.
“I just liked golf more and I just wanted to do it. I didn’t go into it thinking I would get a scholarship. I did it because I loved it so much,” said Speed.
This past season, Speed was All-OVC as she helped the Lady Dragons win the Ohio Valley Conference golf championship. She finished 14th in the Division II sectional golf tournament
Shawnee State head coach Dave Hopkins was one of the key reasons why Speed decided to attend Shawnee State.
“I’m just excited to be a part of a team and meet everybody down there. I love Coach Hopkins. He’s so nice. I haven’t thought too much about the competition part but I’m sure it’ll be good,” said Speed who flirted with the idea of attending the University of Kentucky before the scholarship offer was presented to her.
“It’s a great school and they have a beautiful campus and I thought that this is the place for me.”
Speed is uncertain about how she will stack up against the competition at the next level, but she is not intimidated.
“I think over the years I’ve definitely improved, but there’s still room to improve. Golf is so inconsistent you can improve every time you go out and play. I try to be determined. If I hit a bad shot, I think I can come back from it pretty well,” she said.
Speed plans to major in Exercise Science.

CINCINNATI (AP) — Joe Mixon had trouble getting back to the line of scrimmage on many of his carries in... read more