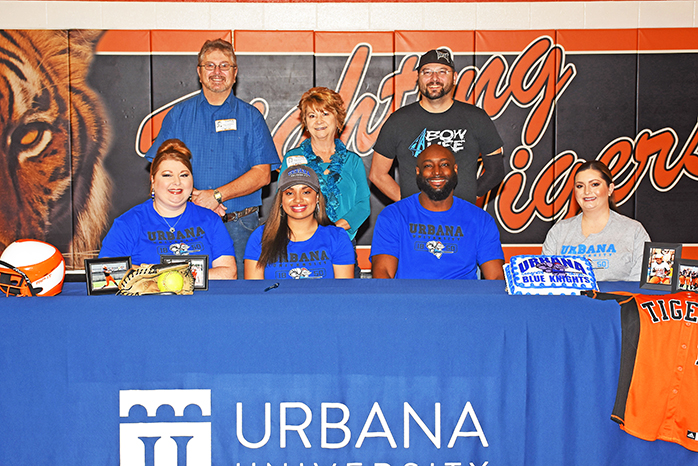 Taiya Hamlet found out that mother knows best.
Hamlet remembers being in the second grade and playing basketball which was her first love. But at the urging of her mother Alicia, Hamlet relented and tried softball.
Although basketball was still her favorite years, by middle school she realized that softball was not only her best sport but he took over as her favorite.
That love and change of focus to softball paid off as the Ironton Lady Fighting Tigers’ senior standout signed a letter-of-intent to play at NCAA Division II Urbana University.
“I started with basketball in kindergarten and when I was in second grade my mom was begging me to play softball,” said Hamlet who also ran track in the eighth grade and tennis last fall.
“I said ‘I’m not playing softball. I love basketball.’ That’s why it’s just crazy that here I am now signing to play college softball.”
Hamlet said she talked with Ohio University, Ashland University, Ohio Dominican and Otterbein before settling on Urbana.
“I never really wanted to go D and D3 can’t give athletic money. I felt like Urbana was where I fit in the most. It felt like home honestly,” said Hamlet.
At Ironton, Hamlet has played shortstop but Urbana head coach Brooke McCartney told Hamlet that she could play third base
“They said they could see me at third base, maybe second base and utility. Just like the high school, wherever they need me I’ll play. I don’t pitch, but if they said they needed me to pitch, I’d get in there,” said Hamlet.
“I’ve always played shortstop but it’s kind of funny because third base is coming over top of that. But like I said, whatever helps the team is where I’ll be.”
Ironton coach Missy Fields said Hamlet has been an integral part of the team’s success.
“She was hurt there a couple of years ago with concussion for a time, but she’s anchored the shortstop position,” said Fields who hinted Hamlet could be shifting to third base this spring.
Hamlet practiced once with the Blue Knights and she said that college softball is going to be an adjustment.
“College ball is definitely different than high school and even travel ball. But I’m really excited to get there and work out with them,” said Hamlet.
In 28 games last season, Hamlet batted a team-high .457 with a home run, 27 runs batted in, 30 runs scored, seven doubles, 15 walks and a .580 slugging percentage.
Hamlet was first team All-OVC and first team for the coaches All-Southeast District.
Hamlet her role at shortstop was just one piece of the puzzle that helped the Lady Fighting Tigers to a 28-2 record and a regional finals berth along with winning their second Ohio Valley Conference title.
“It wasn’t just me. It was the team. We had an incredible season last year and we worked so hard to be where we are. I couldn’t be prouder of my team. If I hadn’t gone to Ironton, I wouldn’t be here where I am today,” said Hamlet.
Hamlet plans to major in either nursing or physical therapy.
“I just want to help people who need more help or if they’re hurt,” said Hamlet.

Chesapeake Panthers’ Austin Jackson drives through Portsmouth defenders as he goes inside to get a layup in an 80-37 win... read more