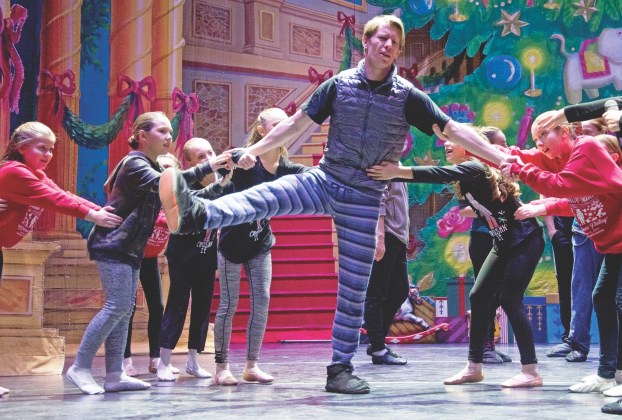 Local children dance with members of the Moscow Ballet during rehearsals for “The Great Russian Nutcracker” at the Paramount Arts center on Friday. (The Ironton Tribune | Heath Harrison)

‘Dance with Us’: Children perform ‘The Great Russian Nutcracker’ with Moscow Ballet

ASHLAND, Ky. — “Are you excited?” Alisa Bolanitkova, audition tour director for the Moscow Ballet, asked children on the stage of the Paramount Arts Center on Friday. “Are you ready?”

More than 70 local dancers were present to rehearse with members of the Moscow Ballet for that night’s performance of “The Great Russian Nutcracker.”

Bolanitkova first visited the Ashland Regional Dance Theatre in October, where she auditioned and rehearsed the locals to join the production as part of their “Dance With Us” program.

Since then, the children and teens had been rehearsing for their support parts in the ballet, where they portrayed children, mice, snow maidens and snowflakes.

On Friday, the locals met the Russian cast for the first time and then were fitted for costumes, before doing their afternoon rehearsal with them in plain clothes.

Bolanitkova directed the children through a party scene, where they were handed gifts and were asked to react to dancers portraying various dolls.

“You see how beautiful she is,” she said of the first.

“These are scary dolls,” she said, asking them to emote for each. “And you are frightened.”

They went over each scene, first being walked through, then trying it with the accompanying music by Pyotr Ilyich Tchaikovsky.

According to Maria Whaley, director of Ashland Regional Dance Theatre, said this is the eighth time the Paramount has hosted the Russian production and, as of Thursday night, it was nearly sold out.

In an unexpected turn of events, Belinda S. Adkins admitted to shooting her ex-husband to death during what was supposed... read more